Realme 8i will be the first phone to feature the Helio G96 SoC, leaked renders reveal more 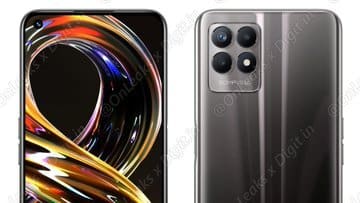 The Realme 8i will soon launch in India and today we have some exclusive information with respect to the upcoming Realme device. The Realme 8i and Realme 8s were both teased by CEO Madhav Sheth during the 28th Episode of AskMadhav which came out earlier this month.

Moreover, the Realme 8s has also leaked previously but there was no concrete information about the Realme 8i, until now.

In an exclusive partnership with Digit.in, OnLeaks has provided us with key renders and key specs of the Realme 8i. The Realme 8i is a budget smartphone in the Realme 8 lineup and is expected to be the most affordable phone out of the lot.

While the Realme 8s has previously been leaked with the MediaTek Dimensity 810 processor, we can confirm today that the Realme 8i is all ser to be the first device powered by the Helio G96 SoC that was launched earlier in July.

Coming to the specs of the Realme 8i, the device has a glossy finish on the back with a gradient design and curved edges. On the back, there is a camera module that houses three cameras along with an LED flash.

We can also observe that the power button doubles up as a side-mounted fingerprint sensor, the device has a USB Type-C port and a 3.5mm audio jack.

The Realme 8i features a 6.59″ Full HD+ display and supports up to a 120Hz refresh rate. The device has a punch-hole cutout on the top-left corner, being a budget device, it weighs a meager 194g and is 8.6mm thick due to its plastic build.

The MediaTek Helio G96 SoC integrated into the device has two Cortex-A76 cores, they clocked at up to 1.05GHz and six Cortex-A55 cores paired with Mali-G57 MC2 GPU. The phone has 4GB of RAM and 128GB UFS 2.2 storage as well.

There is a triple camera array on the back that has a 50MP primary sensor, a 2MP portrait camera, and a 2MP macro camera. The device has a 16MP front selfie shooter.

The Realme 8i is equipped with a 5,000mAh battery that is likely to support fast charging out-of-the-box.

Realme 8i and Realme 8s 5G launched in India

Realme hikes prices of many phones due to components shortage