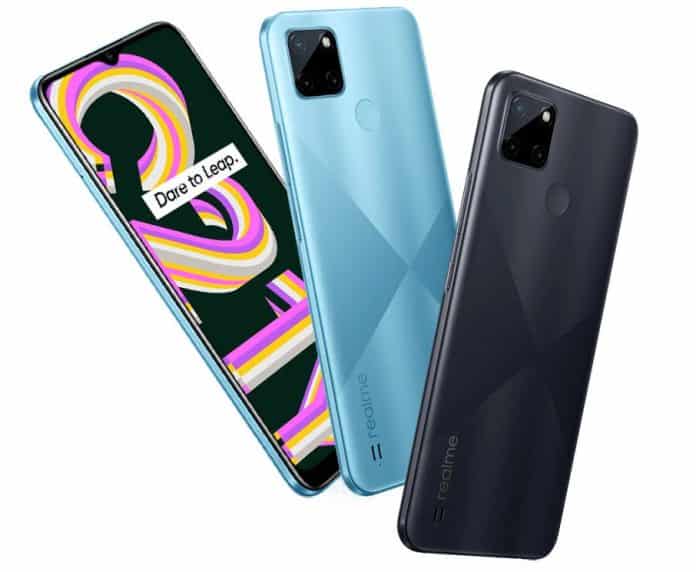 Realme has launched its latest entry-level smartphone under the C-Series for the Indian market, dubbed to be the Realme C21Y, the phone was first launched in Vietnam last month.

It has a 6.5″ HD+ display offering a screen resolution of 1600x720p and an aspect ratio of 20:9. There is also a water-drop notch on the top of the display for housing the front-facing camera sensor.

The processor is not a major upgrade over the MediaTek Helio G35 SoC that was featured in the Realme C21 but it is a bit more powerful in comparison to that.

The device comes packed with up to 4GB of RAM and 64GB of storage, there is also a microSD card slot that allows you to further expand the storage capacity.

Coming to the camera specs of the device, the realme C21Y has a triple-camera setup with a 13MP primary sensor, a 2MP monochrome sensor, and a 2MP macro lens.

On the front, the device has a 5MP camera for selfies.

Connectivity-wise, it comes with the usual set of features, including 4G LTE, Wi-Fi 802.11 b/g/n, Bluetooth 5, GPU/AGPS/GLONASS/, and MicroUSB. There is also a 3.5mm headphone jack. The device also has a fingerprint sensor on the back panel for added security.

The smartphone is running the Android 11 OS with the Realme UI custom user interface on top.

It has a 5,000mAh battery and is claimed to offer all-day usage with a single charge.

The phone is available for purchase via Realme.com, Flipkart, and other offline stores throughout the country.