The Hundred Women’s Final: Oval Invincibles defeat Southern Brave by 48 runs to win the inaugural edition of the Hundred Title 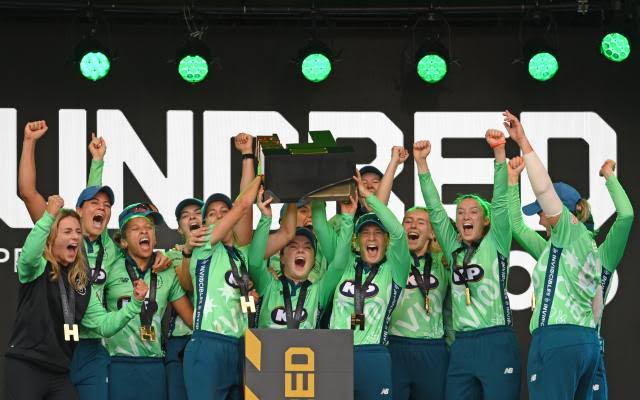 The first-ever edition of the Hundred Women’s finals took place between Oval Invincibles and Southern Brave yesterday. The Oval Invincibles displayed an incredible bowling performance as they defended a total of 122 runs in 100 balls to win the first edition of The Hundred’s title.

Getting into the details of the finals, Southern Brave’s captain Anya Shrubsole won the toss and elected to bowl first. It was a good decision as the captain got the early breakthrough and as a result, the Invincible batters struggled to score runs at a good rate. Although after losing an early wicket Dane Van Niekerk and Fran Wilson built a good partnership of 56 runs.

However, just as they tried to increase the run rate, both the batsmen perished in quick succession. Therefore everything was upto South African Marizanne Kapp and Alice Capsey. Both the middle order batsmen played a quick fire cameos to help Oval Invincible reach 121 in 100 deliveries. Bowling Allrounder Marizanne Kapp was the top scorer of the team with 26 runs of 14 balls. Whereas Anya Shrubsole was the pick of the bowlers for Southern Brave as she finished her spell with 2-16.

Owing to the fact that Marizanne Kapp who opened the bowling demolished their top order with three wickets in the first over itself. Riding on her superb display of spell, the entire team stepped up and in no time the Southern Bravo were reeling at 29-7 and headed towards self destruction.

Morris and West Indian batsmen helped their team to reach a respectable score with their partnership. However, the bowling attack of Oval Invincibles proved too hot to handle as the entire team of Southen Bravo was dismissed for 73. Therefore Oval Invincibles won the first women’s Hundred final by 48 runs.

Marizanne Kapp was declared the player of the match in the finals for her amazing performance with the bat and ball. Kapp scored a quick fire 26 of 14 and took 4 wickets to help her side steamroll Southern Bravo. Further, the winning captain Dane Van Niekerk was awarded the player of the series for her consistent performances throughout the tournament.

The Hundred Men’s Final: Southern Brave beat Birmingham Phoenix by 32 runs to win the inaugural title of the Hundred