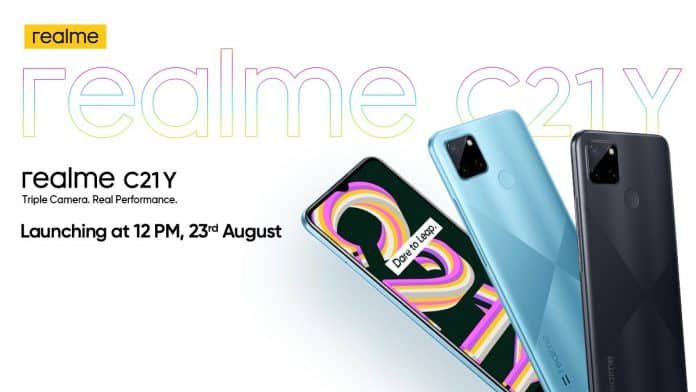 The Realme C21Y will feature a 6.5″ IPS LCD panel that offers an HD+ resolution of 720 x 1600 pixels. It comes with a waterdrop notch which has an integrated 5MP selfie camera. The rear camera features a square camera module with a 13MP main sensor along with two, 2MP additional sensors and an LED flash.

Realme C21Y runs on Android 10-based Realme UI. The phone will be powered by an octa-core Unisoc T610 SoC, paired with a Mali-G52 GPU. There will be up to 4GB RAM and up to 64GB storage options. Storage is expandable via a dedicated microSD card slot.

There is a 5,000mAh battery on Realme C21Y that supports reverse wired charging. For connectivity, Realme C21Y comes with LTE, Wi-Fi, Bluetooth v5, GPS, a 3.5mm headphone jack, and a Micro-USB port for charging. There is a fingerprint scanner on the back as well.