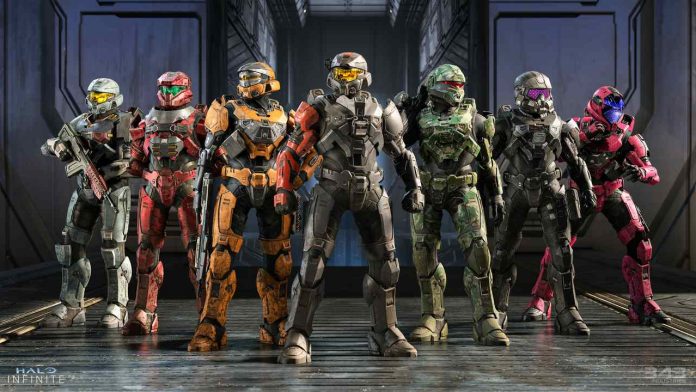 Halo Infinite is an upcoming first-person shooter game developed by 343 Industries and published by Xbox Game Studios for Windows, Xbox One, and Xbox Series X and Series S.

Microsoft’s beloved first-person shooting game developed by 343 studios is scheduled for entry soon in the market and will be exclusive for Microsoft platforms including Windows OS. During the initial unveiling at the E3 2019 the game didn’t reveal a lot, however, since then, much about the game has been unveiled, and more information is coming soon.

Based on what we’ve seen so far, Halo Infinite seems to be one of the best Xbox games of all time. Here’s an overview of everything we know about Halo Infinite so far:

the next major entry to the mainline of Halo games brings the amazing entry of the Master Chief after a waiting period of nearly three years after the launch of 2015’s Halo 5: Guardians.

During lasts year’s Xbox Series X July event on July 23, 2020, the first-ever gameplay footage of Halo Infinite was presented. The game as we know is developed by 343 Studios, which is one of Microsoft’s flagship game development studios, having worked on Halo 4, Halo 5: Guardians, and Halo Wars 2, among other titles.

According to the information till now we know that the game is built on the new “Slipspace Engine,” developed internally at the studio alongside the game. The amazing thing about the latest entry into the franchise is that it is spearheaded by Joseph Staten, a Halo series veteran who has worked on the original games made by Bungie extensively.

the game will reportedly follow the story that began in Halo 5: Guardians, marking the return of Cortana with an army of ancient and powerful Forerunner war machines called Guardians. She then begins her conquest to force the galaxy into submission. It’s unclear as to what the precise plot of the game will be but we do know that the game will take place on Zeta Halo.

coming to the new things added in the game, the Master Chief can now use equipment pickups such as grappling hooks or deployable shields. Players can found these and even upgrade them, in the world, similar to Halo 3.

“We do have a light upgrade system for Chief as he explores this ring. He’ll be able to upgrade equipment items. The grapple and the drop shield that we showed are kind of in that concept of a spiritual reboot that harkens back to the equipment system in Halo 3. Those are two new equipment items that Chief will be able to find and use as you play through the game.”

in the campaign, 343 Studios stated that there will also be a dynamic reactive spawning system for AI to ensure that the challenges players face will be appropriate for the arsenal that they are carrying.

Based on sources, we also that there will be a dynamic audio threat detection system ensuring that the player can always hear weapons being fired directly at them loudly and clearly. The game will even support spatial sound technologies like Dolby Atmos, which is being supported the first time is the franchise, 343 Studios is trying to outdo themselves this time.

It’s not just that but the game will also be cross-play and cross-save between PC and Xbox at launch and the players can play on any platform they want while keeping all of their progression and stats, and play multiplayer or co-op with their friends no matter where they play. This includes:

There will some specific PC centric settings which will be introduced in the Halo Infinite which include:

The game was initially supposed to be launched during the holiday season of 2020, however, due to the impact of COVID-19  the game was delayed to 2021. now the release date of the game is set to Holiday 2021. it’s hinted that the game might be released on November 15, however, that’s not confirmed the news.