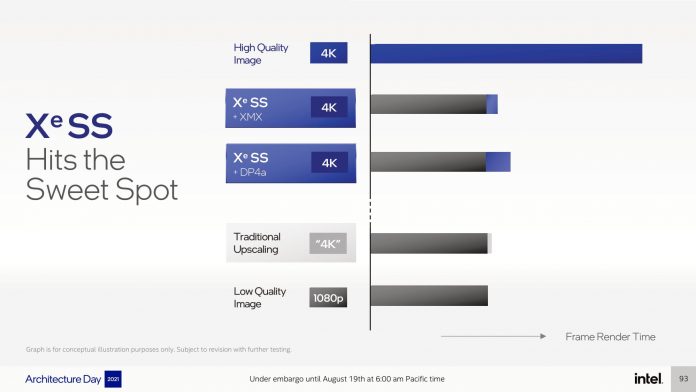 During the even of Intel’s Architectural Day 2021, the company demoed their brand new Xe SS neural supersampling technology which runs on the company’s Xe HPG. The results obtained during this demo were truly impressive.

We already know that the company was working on the Unreal Engine, Microsoft (for DirectX 12 Ultimate), Vulkan (Kronos Foundation), and Unity for API and implementation. And based on the demos we are sure that the company has indeed gained many great results from this as demonstrated in the demo and the XSS is pretty neat at upscaling.

we have already seen the performance of the AMD FSR which is based on conventional algorithms, however, Intel’s XSS is comparable to NVIDIA’s DLSS and is based on neural networks (AI/ML-based) so that the technology offered by Intel can work with far lower input information with far higher fidelity results than what NVIDIA offers. According to the announcement done by Intel we know that the company is planning on delivering up to a 2x FPS increase on the same hardware using XSS as well as the company is planning support for older hardware as well.

The screenshots given below show that the XSS upscaled image results in 2x FPS and the results are barely distinguishable from the native frame. Do remember that the images shown below are only cropped images and in the real frames there are no differences at all. Considering supersampling technology has gained the infamous nickname of “Vaseline”, Intel’s approach looks pretty fancy.

It also speculated that Intel’s XSS will have advanced motion vectors support, making things far more accurate in moving scenes. And the company also announced that it is planning to make the XSS even more open-source once the initial development is completed.