The Redmi 10 is now available globally 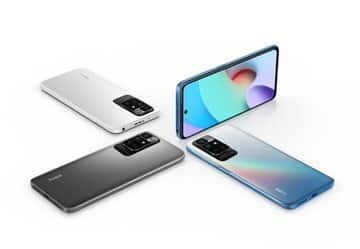 Xiaomi’s Redmi brand has and continues to be its biggest selling point, the Redmi series has constantly brought amazing devices to the market with maximum specs at the best price points.

Redmi continues to extend this run with the Redmi 10, a device that features major upgrades and a couple of features we did not really see in prior Redmi devices.

The Xiaomi Redmi 10 is the first phone in the vanilla series to have a high refresh rate display, the device sports a 6.5″ 1080p LCD screen with a ratio of 20:9, it can run up to 90Hz and also has options to switch to 60Hz and 45Hz rates as well.

The Redmi 10 will also be the first device to implement the MediaTek Helio G88 chipset, the chip is a tweaked version of the G85 but it enables a higher refresh rate at 1080p so we are not complaining.

The star of the show appears to be the camera setup of the device, Redmi has decided to go all-in with a quad-camera setup that has a 50MP primary sensor, the highest ever in the Redmi lineup(Excluding the Redmi Note devices), it is paired with an 8MP ultra-wide-angle module, a 2MP macro lens, and a 2MP depth sensor. Redmi has given an 8MP selfie shooter embedded into the punch-hole on the display.

The Redmi Series has never disappointed us when it comes to the battery life of the devices, the Redmi 10 may carry a lot of features that are a first for this lineup but it also continues Redmi’s commitment towards providing great battery life. The Redmi 10 has a 5,000mAh battery along with support for 18W fast charging(wired) and support for 9W reverse charging. Redmi is bundling the device with a 22.5W charger.

Apart from this, the Redmi 10 has dual speakers, a 3.5mm audio jack, a side-mounted fingerprint sensor, support for face unlock, and it runs on Android 11 with MIUI 12.5 out-of-the-box.

Redmi is shipping the device in 3 storage variants, a base version that has a 4GB+64GB configuration, a 4GB+128GB storage variant, and a 6GB+128GB variant. The only negative that we can spot in the Redmi 10 is that the device lacks a microSD slot, so you will have to make do with the amount of storage that you get according to the configuration that you have opted for.