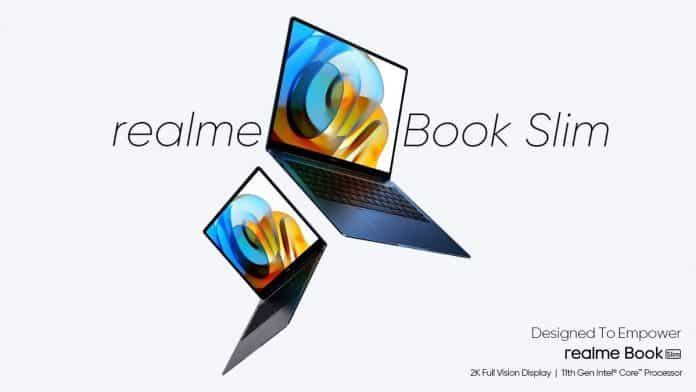 The Realme Book Slim comes with a 14″ 2K Full Vision IPS display with a peak brightness of 400 nits. It has a display that comes with a 3:2 aspect ratio. The laptop has a metal body that provides a 90% screen-to-body ratio, and a 100% sRGB color gamut.

Realme has claimed that the Realme Book Slim will be one of the slimmest and lightest laptops in India with a thickness of 14.9mm.

The Realme Book Slim is powered by 11th Gen Intel Core i5 Chipsets coupled with Iris XE integrated Graphics, so even though Realme had dubbed it to be exclusively for productivity purposes, it appears the laptop can handle a bit of gaming as well.

The device has Wi-Fi 6 technology for connectivity and gets up to 512GB SSD storage and 8GB of RAM.

The Realme Book Slim uses a Thunderbolt 4 port to charge the battery, the 65W charger provides up to 50% of charge in just 30 minutes. Realme has claimed that the laptop has a battery life of 11 hours.

The Realme Book Slim comes with Windows 10 OS pre-installed, it will get the upgrade to Windows 11 for free as well.

The laptop has two Harman Kardon speakers that support DTS Audio, for safety purposes, the laptop has a fingerprint sensor embedded into the power button.

Realme will officially begin selling the Realme Book Slim from the 30th of August at 12 PM on Flipkart, Realme.com, and authorized Realme retailers.