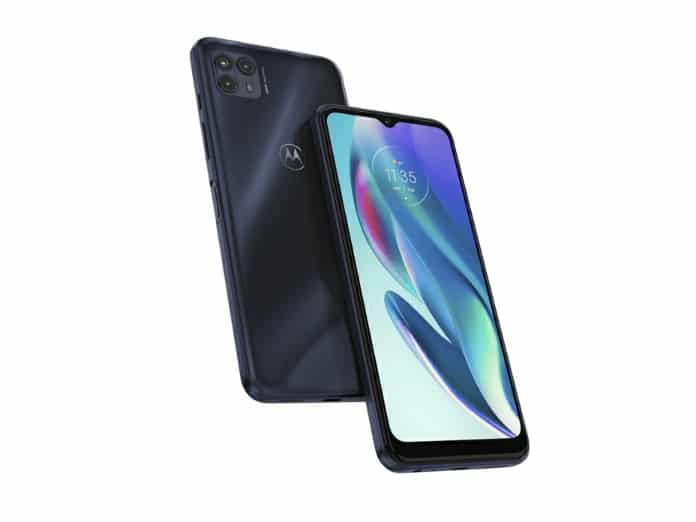 Moto G50 5G (codenamed ‘Saipan’) specifications have been tipped online. The upcoming smartphone is expected to come with a Mediatek Dimensity 700 SoC that might be paired with 4GB of RAM. There is another Moto G50 model — codenamed Ibiza — that is powered by a Snapdragon 480 SoC and also comes with 5G connectivity. Earlier this week, the design and official-looking render of Moto G50 5G ‘Saipan’ were shared by tipster Evan Blass (@evleaks) that showed the difference in design to its Snapdragon-equipped counterpart.

The key specifications of the Moto G50 5G ‘Saipan’ were shared by notable tipster Steve Hemmerstoffer in collaboration with Pricebaba. There has been no official confirmation from Motorola regarding the design, specifications, price, and launch date for Moto G50 ‘Saipan.’

As per the leak, the phone is said to come with a 6.5-inch HD+ display with 720×1,600 pixels resolution. There will be a waterdrop-style notch for the selfie camera. Under the hood, the phone will reportedly pack a MediaTek Dimensity 700 SoC that is likely to be paired with 4GB of RAM and 64GB of onboard storage.

For the camera, Moto G50 5G ‘Saipan’ is expected to be equipped with a triple rear camera setup. There will be a 48-megapixel primary sensor. The specs of the other two sensors were not disclosed. On the front, the phone will get a 13-megapixel sensor for selfies and video calls. The smartphone is also expected to get a side-mounted fingerprint sensor.

Connectivity options could include NFC, a 3.5mm headphone jack, and more. It should run Android 11 out of the box. Moving on, the battery size of the device isn’t known right now, but Pricebaba guessed that it would have a 4700 mAh battery. This is based on a Motorola phone with the model number XT2149-1, which was seen on Brazil’s Anatel certification website recently.

The Moto G50 5G, which is codenamed Ibiza, has a 6.5-inch HD+ 90Hz display and a 13-megapixel front camera. It also has 48 megapixels, 5 megapixels, and 2-megapixel cameras on the back. However, that phone runs on the Snapdragon 480 chipset from Qualcomm, which is the key difference between the two devices. That phone also has 4GB of RAM and 64GB storage like this one, though there’s a 128GB storage variant of the device too. The side-mounted fingerprint scanner and 5000 mAh battery remain, and that phone also supports 15W fast charging.