Simple One Electric Scooter launched in India at Rs. 1.10 lakh 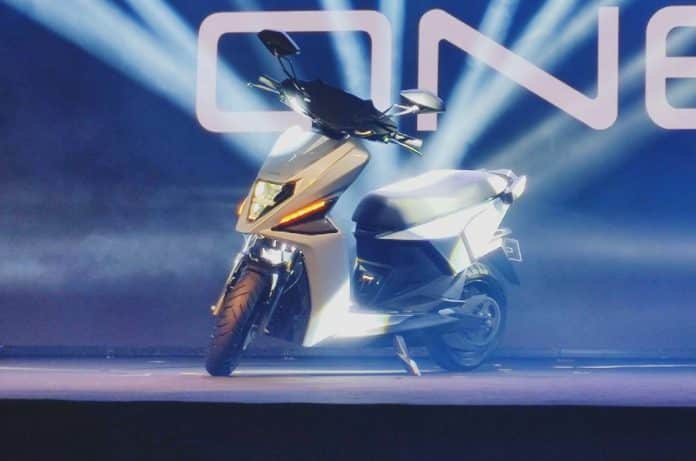 After Ola Electric revealed its first-ever electric scooter earlier in the day, another home-grown manufacturer. Simple One electric scooter has been launched at Rs.1.10 lakh, which excludes other taxes and subsidies. The Simple electric bike comes with a removable lithium-ion battery with the highest capacity in the segment.

The Simple electric bike comes with a 4.5kW motor that pulls a maximum torque of 72Nm. The company claims that the scooter is able to accelerate from 0-40kmph in 2.95 seconds, along with a top speed of 105kmph. The top speed also depends upon the choice of tyres: 90/90-12 front/rear and 100/80-123 & 11/80-12 front/rear. The electric scooter has multiple riding modes: Eco, RIde, Dash and Sonic, mentioned in increasing order of power/speed and decreasing order of effective range.

The Bengaluru based company has patented an in-house design for motor chassis and brakes. Both the tyres have disk brakes, along with a fine-tuned suspension. The battery pack has a metallic covering on the outside, and a handle on the top. The battery capacity of the Simple One electric bike is 4.8kWh, which is roughly 20% more than that of the recently launched Ola S1 Pro, and double of Ather 450X.

Along with the battery, Simple Energy claims a maximum range of 203km in Eco Mode, which is the most battery efficient mode on the electric scooter. The battery takes around 2.7 hours to charge. Unlike any other electric bike in the segment, the Simple One e-scooter comes with a 7″ touchscreen display that supports 4G and Bluetooth connectivity. Other features include call and music control, vehicle tracking, navigation and a monitoring system for tyre pressure.

Simple One will be available in four colour choices. Namma Red colour is dedicated to Karnataka, and Simple One is also available in azure blue, grace white and brazen black. Pre-bookings have commenced for Rs 1,947 through company website.