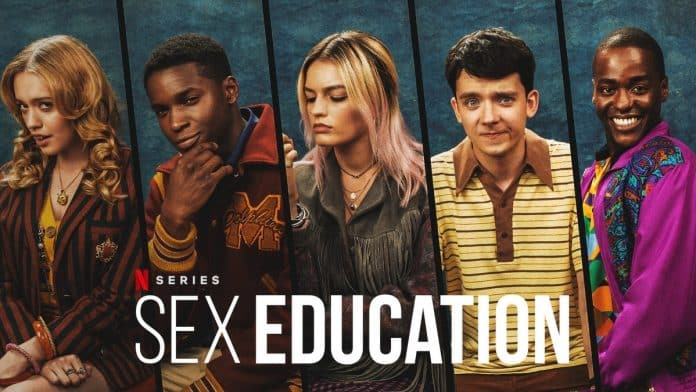 Sex Education is a British Comedy-Drama released on Netflix, which is an American-based OTT platform. It was founded by Reed Hastings and Marc Randolph in Scotts Valley, California.

Sex Education is a television series written and created by Laurie Nunn. Starring Asa Butterfield as Otis Milburn, an insecure teenager, Gillian Anderson as Dr. Jean Milburn, a sex therapist, and mother of Otis Milburn. These are the two main characters in the series.

It was premiered on 11th January 2019. After the release, it became a grand commercial success for the OTT platform. Netflix crossed 40 million viewers streaming the first series after its debut. The second series was released on 17th February 2020.

Sneak Peek of Season 1 and Season 2

In the first season, the story revolves around Otis Milburn, who is an insecure teenager. He studies at Moordale Secondary School. His mother is a Sex therapist and, on a contrary note, is very frank about all aspects of sexuality. But on the other hand, Otis has mixed feelings or contradictory ideas about sex due to his mother’s profession. After getting bullied at school due to his sexual performance anxiety, he thought to set up a sex-advised business with his troubled classmate named Maeve, which will lead to help their classmates to deal with their individual sexual problems.

In the second season, Otis was in a relationship with Ola. After being in the relationship, he actually faced reality and the pressure of high school romance. Further, the romance was tested by new classmates, who challenges various existing affairs like social-political issues at Moordale and chlamydia outbreaks that cause difficulties with tropical issues.

Some passing portraits of the main cast of sex education have also been noticed. It seems that they all will be present in season 3. The teaser of season 3 closed with a welcome note in search of more sex education season 3.

We have already come to know previously prior to its official announcement that there will be a renewal of the Sex Education series but now we can confirm that Netflix is all set and has renewed the series for its third installment.

All thanks to Production Weekly, we have learned that the third season of Sex Education is reported that it originally began its filming in the month of May 2020 and ended in the month of September 2020. But it did not happen as we will get into it in just a second.

Further, the creator Laure Dunn has added the Sex Education has already confirmed that she is writing for the third season.

Dunn originally confirmed that she began writing for the third season regardless of the series renewal status:

“That’s just a very normal part of the process because we work on such a tight schedule, and season 3 hasn’t been greenlit yet or officially commissioned.”

After some rescheduling due to Covid-19, Netflix has officially confirmed that the Sex Education Season 3 has begun its production. The revelation of the script of the first episode is for sure will excite the fans, and hopefully, we’ll see some photos on set soon.

The UK & Ireland Twitter of Netflix has also revealed its own beginning productions for Sex Education.

At the beginning of December, Netflix UK’s Twitter account has dropped some behind-the-scenes photos of life on set for the cast of Sex Education.

Netflix dropped even more images for us to speculate on what’s happening in the third season!

Expectations from the season

The creator and writer of the web series Laurie Nunn said in an interview that they have a very tight schedule regarding the shoot and production of the series. They are taking a bit longer, but they will be back stronger. She also says that she loves writing and playing with the characters.

She thought that the theme of the series is wonderful and practical, which will reach all generations of people, especially teens, and the theme is based on sex and relationship. With this, she can offer an endless story opportunity to please and mesmerize the audience.

In season 3, there is a prediction that Otis will profer his love for Maeve again- this time in person at the beginning of the third season. We also want them to get together in the new episodes.

Though there are not too many spoilers but Asa Butterfield, who plays Otis, reveals a huge plot point while speaking to The Guardian. He said that season 3 would start after a time jump. He shared, “There’s a bit of time jump since the season two cliffhanger. Otis is back at school, but he’s got different things on his plate. He’s grown up a bit and become slightly sassier. It’s been fun to portray his newfound charisma. Don’t worry, though, he’s still tragically awkward too.”

There are many more exciting and new plots and new attractions and expecting to come in this new season. Along with this Netflix series, many more series will have their new season coming in this year.

The following cast members are expected to return for the third season of Sex Education:-

According to Scooper Daniel Richtman, we got to know the word of a brand new character going into season 3 called Cal.

Cal is described as “a 17-year-old non-binary stoner kid.” and is set to be a recurring role and they’re actively encouraging “non-binary/genderqueer” actors to apply for it.

Sex Education has become one of the most popular series on Netflix to date, it was not surprised about the renewal of its third season as we already know that Netflix is going to make it return.

The Sex Education Season 3 is going to release on 17th September 2021 as it was announced on 24th June 2021, while it was followed by its first look pictures.

We can expect the third season to premiere eight-season like the two previous seasons but still, now we are waiting for the confirmation.