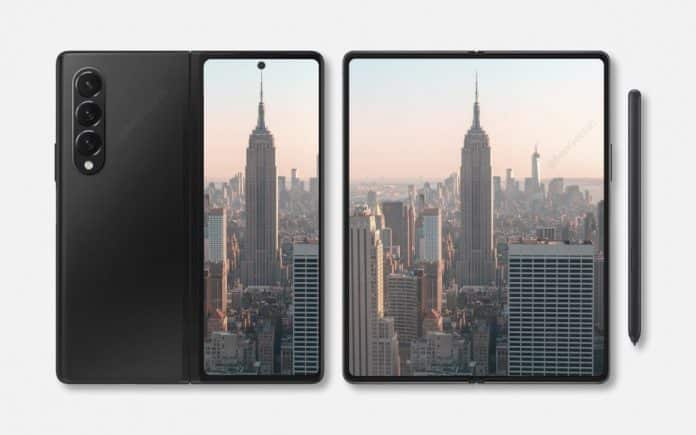 This has been a blockbuster week for Samsung, the South Korean giant successfully unveiled the Galaxy Z Fold3 and the Galaxy Z Flip3 amongst other prominent devices at the Galaxy Unfold 2021 event.

Samsung reiterated throughout the event that their main focus while developing the new devices was to make them more durable for everyday usage. The Galaxy Z Fold3 has IPX8 water and dust resistance rating, a new protective film on the inner display for improved structural integrity, and a stronger metallic hinge, and more.

Apart from the improved durability, there are some other improvements that Samsung did not tell us about at the launch event, the Galaxy Z Fold3 comes with a new generation of OLED panels called the  Eco²OLED that claims to be much more power-efficient than the current OLED display technology. The OLED technology also offers an eco-friendly design and an improved under-display camera.

Samsung Display on Monday detailed the Eco Square OLED panel, the latest OLED display tech for smartphones. The Eco²OLED panel gets rid of the traditional polarizer layer, an opaque plastic film that is situated in between the actual panel and cover glass. This dark layer plays an important role in the current-gen OLED panel as it blocks external light from entering and reflecting off the display. It improves contrast and visibility.

As per AnandTech, the problem with using a polarizer layer is that it reduces transmittance and absorbs some of the light emitted from the panel, thus requiring more light and power to achieve the ideal viewing experience.

The Eco square OLED display claims to fix both these issues by removing the traditional polarizer layer, which in turn improves the transmittance rate or the screen brightness by up to 33% while reducing power consumption by up to 25%.

In simpler terms, the new panel technology offers a brighter display while still using less power. According to Samsung, since the Eco square OLED eliminates the polarizer, it also improves the light transmission to the under-display camera.

The Eco2OLED panel is debuting first on the new Galaxy Z Fold3 as a foldable display. Samsung has not yet mentioned if it will be using the new panel on the other upcoming Galaxy devices.