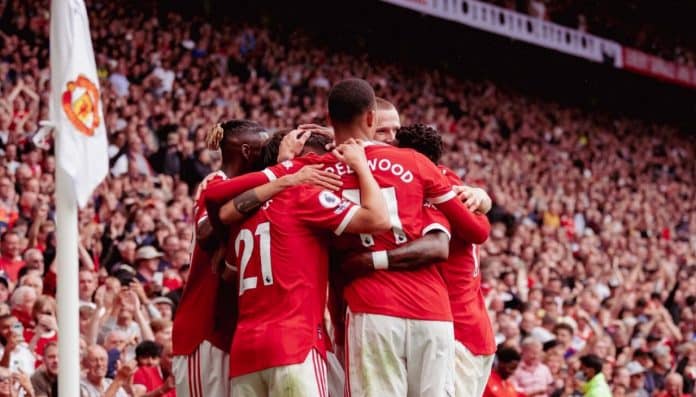 Later, Fernandes stated of his teammate, “People argue about Paul’s quality, but his quality is not up for debate.” We know what he’s capable of, and he demonstrated it today. He’s a crucial member of our team. We’ve come to expect Paul to put on these kinds of shows.

BRUNO Fernandes kicked out the new season in the same way he ended the previous one: with a 30-minute hat-trick that swept Manchester United to a stunning victory in front of a raucous Old Trafford crowd.

The United playmaker put in a spectacular performance as his club reacted to Ole Gunnar Solskjaer’s appeals for stronger home form in the new season, with the stadium full for the first time in 524 days.

The Portuguese playmaker gave United the lead in the first half, and although Leeds equalized, he led Ole Gunnar Solskjaer’s team to victory with a harsh and clinical response.

At a Leeds throw-in, Stuart Dallas was unmarked and found his teammate with a short pass, which Ayling lobbed past David de Gea from 25 yards.

United’s spirit was put to the test early in the season, and they passed with flying colours as Mason Greenwood regained their advantage after 52 minutes.

Pogba was the creator once again, this time with a beautifully weighted curling pass that allowed the teenage striker to race away from Pascal Struijk and into the Leeds area, where he planted a lethal finish off the far post.

Pogba supplied the assist once more, this time with a pass that found Fernandes in space in the Leeds area. Despite Ayling’s best efforts to clear his finish off the line, the Portuguese checked himself to fool the keeper, and goal-line technology permitted it. Nobody was more dominant than Fernandes for United.

United made it three goals in eight minutes on the hour, with Fernandes once again unstoppable as he raced goal side of Robin Koch to follow Victor Lindelof’s long pass forward.

After allowing the ball to bounce twice, Fernandes unleashed a stunning volley past the diving Meslier. United was not finished, and after Fred made it 5-1 after 68 minutes, three goals in eight second-half minutes became four in 16 minutes. Pogba’s fourth assist of the afternoon came when he took advantage of the developing gaps in Leeds’ defence on the left and squared the ball for Fred, who swept in the ball from 18 yards.

- Advertisement -
Powered by JustWatch
Share
Facebook
Twitter
Pinterest
WhatsApp
Linkedin
Previous articleRealme Book Slim may come with Core i5, 2K display and PC Connect feature
Next articleApple admits error that occurs while using the scanner on the Mac and provides an alternative