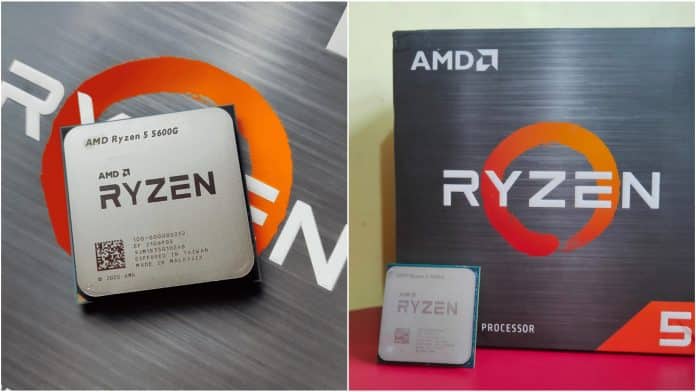 AMD launched both of their Ryzen 5 processors based on their Zen 3 architecture in the market, but both its pricing is very close to each other. There’s only a $30 price difference; however, as the Ryzen 5 5600X has been there for quite some time now, its price is around ₹27k in India while the newly launched Ryzen 5 5600G is available for ₹28k, so obviously, you might be in a confusion of which one to go for.

Having reviewed both of these processors for quite some time now, I hope this article will surely help decide to buy the perfect processor. Well, on paper, both of these AMD chips are very close to each other but with subtle differences:

Both of them comes with a Wraith Stealth cooler, which is a plus point for system builders and both of them only consuming 65W TDP, so essentially, you can expect an efficient system with these processors. Now, another key difference, as you know, is the presence of iGPU in the Ryzen 5 5600G and you no integrated graphics in the 5600X.

Here I will broadly categorize the differences in performance for these Ryzen 5 CPUs in two main aspects:

In terms of productivity, obviously, the Ryzen 5 5600X has the edge over the 5600G because of those subtle differences mentioned before.

Here are the productivity benchmarks that will show the differences between both of these processors:

In single-core, the Ryzen 5 5600X has a slight edge over the 5600G because of higher sustained boost clock speeds, and there is around 10-15% performance difference in various multi-core benchmarks; however, in real-world applications, there’s up to 10% better performance for the Ryzen 5 5600X.

So, considering both are at almost the same price, you can get the 5600X if you are asking for raw performance. Also, when overclocked, the Ryzen 5 5600X performs very well and can even compete or outperform the older 8 core CPUs. Undoubtedly, in terms of productivity, the Ryzen 5600X is all you need if you have a discrete GPU.

Here comes the main advantage the Ryzen 5 5600G enjoys, it has the integrated GPU inside it that helps you, first of all, to get display output if you do not have a graphics card. Secondly, if you feed a good amount of fast RAM, the APU will give good performance in productivity apps like PhotoShop or Premier without even using a discrete GPU.

This comes down to your personal usage and your use of your PC; if you do not own a GPU and are not looking to upgrade to it shortly, you are better off with the Ryzen 5 5600G. The iGPU inside it can benefit you in productivity works, and you will get an all-in-one package by buying this APU.

However, if you are an enthusiast who owns a GPU, that may be any GPU, you should opt for the Ryzen 5 5600X; undoubtedly, it is faster, has PCIe gen 4 support and has the ability to handle even a strong GPU like RTX 3080. For absolute performance lovers who have a GPU or looking to get one soon, the Ryzen 5 5600X should be the one you should be looking out for.

Well, here I feel there will be two sets of people – one who has their own GPU and looking to pair or upgrade their CPU, secondly one who do not own a GPU, so they want an APU to game using the integrated graphics and upgrade later.

So, for the second category of people, here are the iGPU benchmarks of the Ryzen 5 5600G:

Now, if you are looking to play games using a discrete GPU, here is a quick comparison between the two processors, however, apologies for not pairing up the same GPUs for both of these AMD chips. The Ryzen 5 5600X is paired with a Radeon RX 6800 while the Ryzen 5 5600G is coupled up with Radeon RX 6700 XT, here are the benchmarks in various games:

As you saw in comparison of both these processors, the AMD Ryzen 5 5600X is clearly a better choice in both productivity or gaming performance. However, if you do not have intentions of buying a GPU then you can opt for a Ryzen 5 5600G, however, in my personal suggestion, just get a used GPU or any low budget GPU for getting output or playing basic games.

However, if you are a serious gamer and want the absolute best, then look no further as the discounted Ryzen 5 5600X makes more sense. Both of these AMD chips are excellent in my opinion, however, the pricing in India is so close that don’t end up making the wrong decisions.