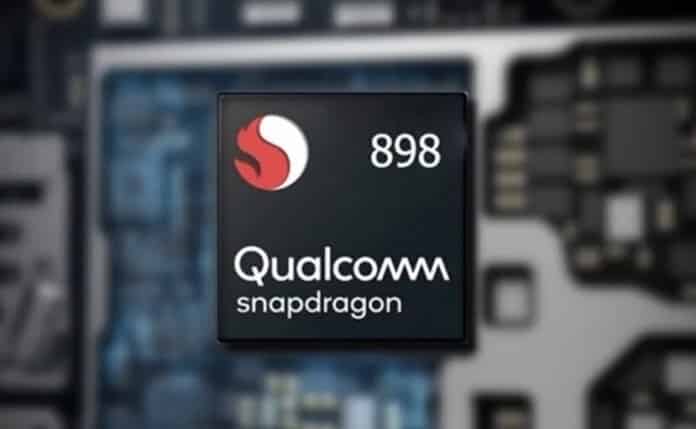 Qualcomm recently unveiled the Plus variant of Snapdragon 888 with an overclocked prime core operating frequency. Now, new reports have surfaced about the Qualcomm Snapdragon 898 SoC which reveal the chipset will be made using Samsung’s 4nm process.

For those unaware, the Snapdragon 888 was also made using Samsung Foundry’s 5nm LPE process. The new report comes from a known tipster, Digital Chat Station. The upcoming Snapdragon 898 (or 895) will have the model number SM8450. As usual, most of the flagships launching next year will be equipped with this SoC.

The source posted the information of Qualcomm Snapdragon 898 on the Chinese microblogging platform Weibo. It suggests the results are from an early sample test of the new platform. The chipset is apparently getting a bit too hot during tests but it shouldn’t be anything to worry about. Qualcomm likely has yet to work on the thermal management department for the new chip. It could be focusing on performance improvement first up. There’s every possibility that the performance gain will increase further, or even drop a bit, by the time the company reaches the production stage.

The new chipset will reportedly feature a 1+3+2+2 CPU cluster. Along with the Cortex-X2 super core, we will likely get three Cortex-A710 cores, two higher-clocked Cortex-A510 cores, and two more Cortex-A510 cores at a lower clock speed. This should allow for more efficient handling of tasks, resulting in improved battery life on devices.

A couple of phones have been rumoured to launch with this chip. The first one with this SoC should be the Mi 12, considering Xiaomi’s track record. Infact, the Mi 12 may even pack the latest LPDDR5x memory. The new RAM configuration offers a maximum data transfer rate of 6,400Mbps to 8,533Mbps. It is double what the LPDDR4x RAM does.