CyberDog by Xiaomi, a quadruped robot appears in an official video 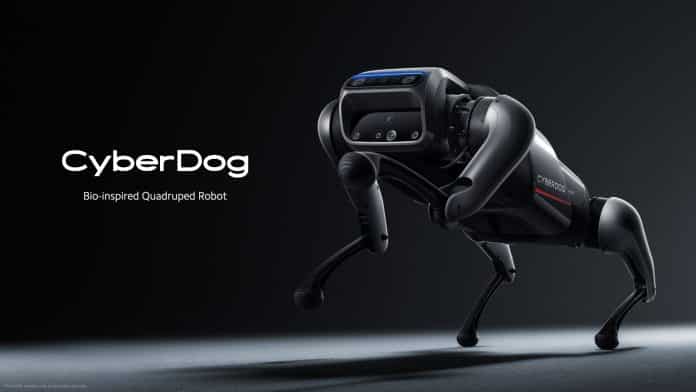 Xiaomi has developed a new bio-inspired, quadruped robot — CyberDog. The robot is equipped with touch sensors, cameras, ultrasonic sensors, and GPS modules to help it sense, analyze, and interact with its environment. Now, Xiaomi has released its first video (below) featuring CyberDog.

The footage gives us the first opportunity to see the quadruped in motion, and you won’t surprised to learn that on video the resemblance to Boston Dynamics’ Spot robot is more striking than ever.

The sequence is as sci-fi as it is dramatic, showing CyberDog in a high-tech laboratory as it apparently bursts into life for the very first time. While exploring its surroundings, it suddenly performs the backflip maneuver that Xiaomi told us about in its blurb when it unveiled CyberDog earlier this week. Well, half a backflip; for some reason, Xiaomi decided not to show the entire move in the video.

Rather than offer its own ideas for how CyberDog might be used, the Beijing-based tech company is offering an initial run of 1,000 CyberDogs for developers around the world to see what kind of tricks they can teach it. Interested developers will, however, have to fork out 9,999 Chinese yuan (about $1,540) for a CyberDog unit, which, while not cheap, is a significantly more palatable price than the $74,500 price tag attached to Boston Dynamics’ Spot.

Developers who offer CyberDog a home will have plenty of technology to work with, the robotic mutt coming with a slew of sensors and cameras, various ports, and servo motors that afford the contraption a wide range of motion (including that backflip!) and a top speed of 3.2 meters per second. It can also respond to voice commands and be operated via a smartphone app.

It’s too early to say if CyberDog’s talents will be properly unleashed or if Xiaomi’s robot is destined for the scrap heap like so many other robots that promised so much. After all, the jury is still out on Boston Dynamics’ Spot robot, which, despite its undoubted talents and remarkable technology, continues to sniff around for commercial success across a range of industries since becoming available for purchase in June 2020.