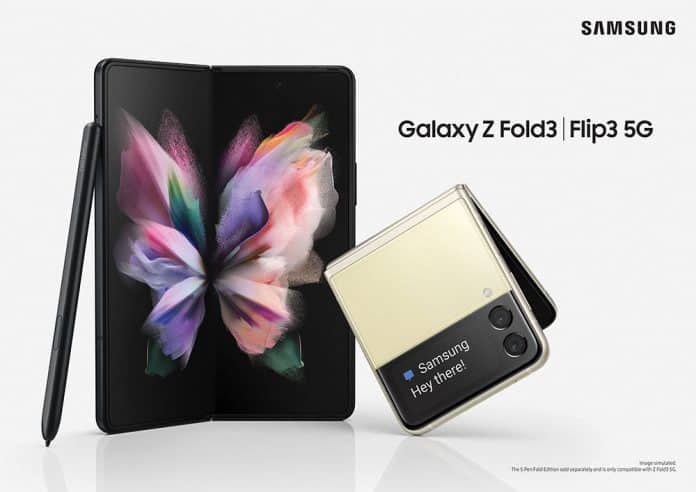 Samsung held its much-awaited Galaxy Unpacked event today in which it revealed the Galaxy Z Flip3 and the Galaxy Z Fold3, both foldable devices that have been in the works for quite some time, and rumors regarding their specs have been emerging over the past few months.

Let us take a look at the specs of these devices:

Samsung Galaxy Z Fold3 has a 7.6″ QXGA+ Dynamic AMOLED 2x Infinity Flex Display with an under-display camera, we knew this as the previous leaks that had emerged, none of them had a waterdrop notch or any sort of punch-hole setup in the renders.

The device has a refresh rate of 120Hz and Samsung claims that it is lighter than your morning cup of coffee.

The cover screen measures 6.2″ and the back of the device is made from Armor Aluminium while the display is protected by the Gorilla Glass Victus which offers up to 4x protection against scratches.

Coming to the camera specs of the device, the Galaxy Z Fold3 will feature a Wide 12MP sensor with an Ultra-Wide 12MP lens and a 12MP Telephoto lens, Samsung claims the camera offers face detection and can automatically sense when a person is out of frame while clicking a picture, not only that but it also automatically shifts towards that person to ensure that they are brought into the frame. The front camera will be a 4MP selfie shooter. The cover camera will be 10MP but is not tugged under the screen.

The Galaxy Z Fold3 has IPX8 water and dust resistance rating, something that has not been integrated into foldable devices previously, it also comes with support for a stylus, the S Pen in particular.

The device is powered by a 4,400mAh battery that supports 25W fast charging and 10W wireless fast charging. It is available in two RAM/Storage variants, a 12GB+256GB version and a 12GB+512GB version.

The device runs on Android 11 with Samsung One UI on top. Other features integrated into the device are a side-mounted fingerprint scanner, facial recognition, Samsung pay, and 5G support.

Samsung has priced the Galaxy Z Fold3 for $1,799(1,33,000 INR) and the pre-orders have opened up for customers from South Korea, Europe, and the US. The official sale will begin on August 27th and the device will be available in Phantom Black, Phantom Green, and Phantom Silver colorways.

The Samsung Galaxy Z Flip 3 features two displays as well, a 6.7″ Full HD+ Dynamic AMOLED 2X main screen that supports a higher refresh rate of 120Hz and an outer screen that is a 1.9″ Super AMOLED one.

The Galaxy Z Flip3 has dual rear cameras, 12MP wide and ultra-wide cameras, it sports a 10MP front camera. Samsung has released the device in two storage variants, an 8GB+256GB version, and an 8GB+128GB version.

The device is powered by a smaller 3,300mAh battery that supports 15W wired charging and 10W wireless charging. The Galaxy Z Flip3 also has an IPX8 rating and support for Samsung Pay.

The device retails for $999(74,000 INR) and comes in Cream, Green, Lavender, and Phantom Black color variants. It will also go on sale from the 27th of August and is open for Pre-orders in select markets.