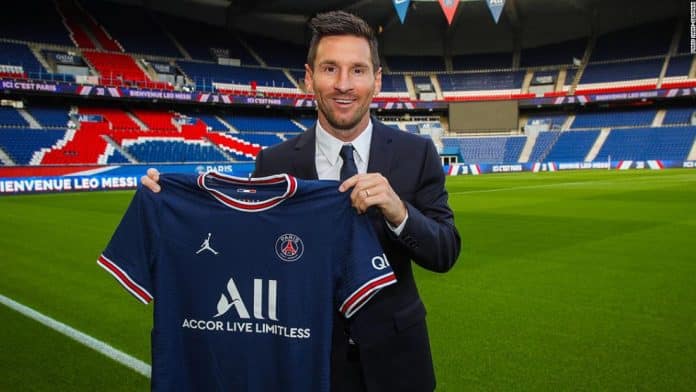 In a world first for such a high-profile signing, Leo Messi received a large number of ‘$PSG Fan Tokens’.

Token implementation comes as a great illustration of the way the Club is constantly finding ways to increase and diversify its revenue streams to continue developing as a global brand.

In 2018, Paris Saint-Germain made a pioneering step into the world of blockchain, becoming the first sports franchise to partner with Socios.com. Since then, Paris Saint-Germain and Socios.com have been working side by side to capitalize on this new and unique way to connect the Club with the Fans, and the best is yet to come. For millions of PSG supporters around the world, Fan Tokens have become a creative way to engage with the Rouge & Bleu.

Paris Saint-Germain fans have been very active on Socios.com, taking advantage of a host of engagement opportunities on the app. Through $PSG Fan Tokens, fans worldwide get the opportunity to choose a motivational message on the wall of the dressing room before a key game, the Goal of the Season, or the winners of the club’s end of season awards. Fans have also received unique, personalised video messages from first team stars via the platform, and even more exciting activations
are planned for the coming weeks and months.

The hype surrounding the latest signings in the club’s busy summer transfer window created a huge surge of interest in $PSG Fan Tokens, with trading volumes exceeding $1.2 billion in the days preceding the move.

Marc Armstrong, Chief Partnerships Officer of Paris Saint-Germain said: “Fully embracing Socios.com and $PSG Fan Tokens has proved a massive success for the Club. We have been able to engage with a new global audience, creating a significant digital revenue stream.”

Alexandre Dreyfus, CEO of Chiliz and Socios.com added: “Paris Saint-Germain are reaping the rewards of their bold approach and I believe this could be the start of a new trend as Fan Tokens and Socios.com play an increasingly prominent role across sport at the very highest level.”

Paris Saint-Germain football club was created in 1970 and celebrated its 50th anniversary in 2020. Since QSI’s purchase of the club in 2011, it has undergone a transformation to become one of the world’s top football clubs and global sports brands. The club has won 27 trophies in just ten years, for a total 43 in
its history, making it the most successful football club in France. Paris Saint-Germain has attracted many great players including Ronaldinho, Beckham, Ibrahimovic, and currently Neymar Jr, Mbappé and Messi, all ranked amongst the top five players in the world. The international popularity of the club never stops growing. It is now the one of the most followed clubs in the world, expanding from zero to a community over 100 million social media followers in just ten years. This pioneering sports club – which includes men’s football, women’s football, handball and judo squads – was one of the first sports clubs to branch into eSport back in 2016. Giving back to the community is fundamental to the club, which has drastically increased the capacity of its Foundation to develop wide-reaching programmes for disadvantaged young people.

- Advertisement -
Powered by JustWatch
Share
Facebook
Twitter
Pinterest
WhatsApp
Linkedin
Previous articleLimited Deal: boAt Airdopes 138 at Rs.999 can be one of the best Rakhi gifts this year
Next articleManchester City waiting for Tottenham to change their stance on Kane with a €150 million bid ready