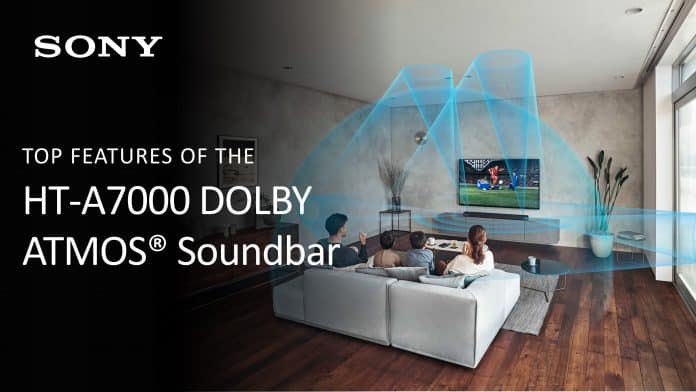 The main show is the flagship HT-A7000 Dolby Atmos 7.1.2-channel soundbar, which will ding your wallet to the tune of $1,299(roughly Rs. 96,000). For that cash, you get two HDMI 2.1 inputs and one eARC return channel, so you can plug both of your next-gen consoles in at one time if you so wanted.

It’s got two up-firing speakers for that sweet Atmos sound, two beam tweeters, and five front speakers. It also has an inbuilt dual subwoofer, but if you really want extra bass, Sony has a 300W wireless subwoofer for $699.99 or a 200W unit for $399.99. You can also add a couple of wireless rear surround speakers for another $349.99.

It can also tune itself to your room’s acoustic properties, supports 360 Reality Audio, Hi-Res Audio, and has compatibility with Amazon Alexa, Google Assistant, Chromecast, Spotify Connect, and Apple AirPlay 2.

Sony says that the HT-A7000 can create virtual surround sound calibrated to your room’s acoustics, though if you find it lacking, you could also add the SA-RS3S wireless rear speakers for £450 ($350).

The second package is an intriguing new wireless surround system called the HT-A9, consisting of four light grey, cylindrical, wireless speakers, each measuring around 30cm in height and controlled by a small hub.

Sony claims you can position the omnidirectional HT-A9 units anywhere within your available space (so long as each one is near a power socket) and its Sound Field Optimisation technology will use the dual microphones in each speaker to measure their relative position. The HT-A9 will be priced at $1799(roughly Rs. 133,000) which is about , and again can be enhanced by the addition of the SW-SW3 or SA-SW5 wireless subs.