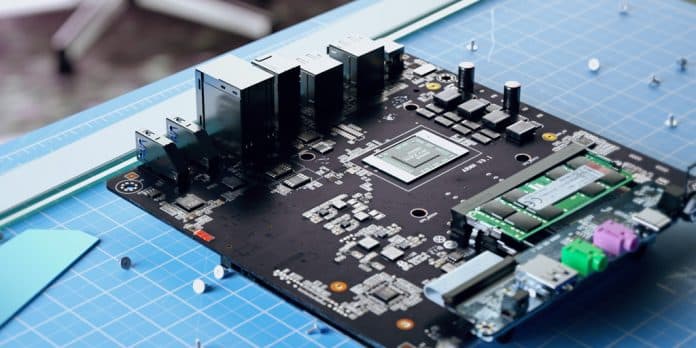 However, things are changing as of now, as More fine Focus and Minisforum computer manufacturers have announced or at least teased the next-gen Mini-PCs which will be equipped with AMD Ryzen 5000 series.

Coming to the MoreFine S500+ MiniPC will be officially featuring the AMD Ryzen 9 5900HX 8-core and 16-thread unlocked processor with a boost clock up to 4.6 GHz. This is the top SKU in the whole Cezanne (AMD Zen3) APU lineup. Other specifications include the support for two M.2 2280 SATA/NVMe drivers as well as it additionally supports a single 2.5 inch HDD or SATA drive.

The mini forum team on the other hand has offered a teaser showing a slightly larger device that is equipped with AMD Ryzen APU. According to sources, the device which the manufacturer is working on appears to be powered by Renoir, but the processor SKU label lists ‘X’. it suggests that the device might be powered by Cezanne silicon. And recent reports confirm that Minisforum is indeed working on 5900HX based MiniPC.

As for the prices of these AMD Ryzen 5000 powered MiniPCs, both Finer nor Minisforum have officially provided any confirmation on this matter.