Leonardo Spinazzola will miss rest of the Euro 2020 campaign 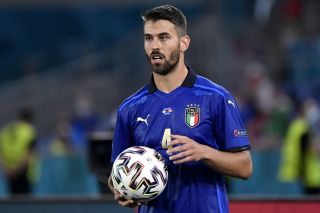 The 28-year-old Italian fullback has been vital in Italy’s European campaign this season, however, Spinazzola’s campaign has come to an early end and has been ruled out for the rest of the tournament due to a ruptured Achilles tendon.

This Friday during Italy’s clash against Belgium in the quarter-finals the Italian wing-back was chasing a long ball during the 75th minute of the game following which he signalled the medical team to come and then was in tears and had to be taken out in a stretcher following this injury.

This injury will prove to be a blow for both the wing back’s club and the country as this injury will mean Leonardo Spinazzola to be out for most of the year this season.

The wing-back has been facing injury-related difficulties for 2 years now ever since leaving Juventus for AS Roma. Before Spinazzola’s injury yesterday there were rumours of interest from Tottenham Hotspurs, Real Madrid and FC Barcelona.

Spinazzola made his international debut back in 2017and ever since then has made 18 appearances for his country. While in his 2 years with AS Roma Spinazzola has gone on to make 71 appearances for the club while scoring 4 goals and providing 11 assists in the process.

According to UEFA, Leonardo Spinazzola was the quickest player in the Euros this season clocking at 21 mph, surpassing the likes of Kylian Mbappe, Kingsley Coman and Raheem Sterling.

The Italian wing-back stated via Instagram “Unfortunately we all know how it went but our blue dream continues and with this great group nothing is impossible.”

Hiring in the IT sector takes a hit in India