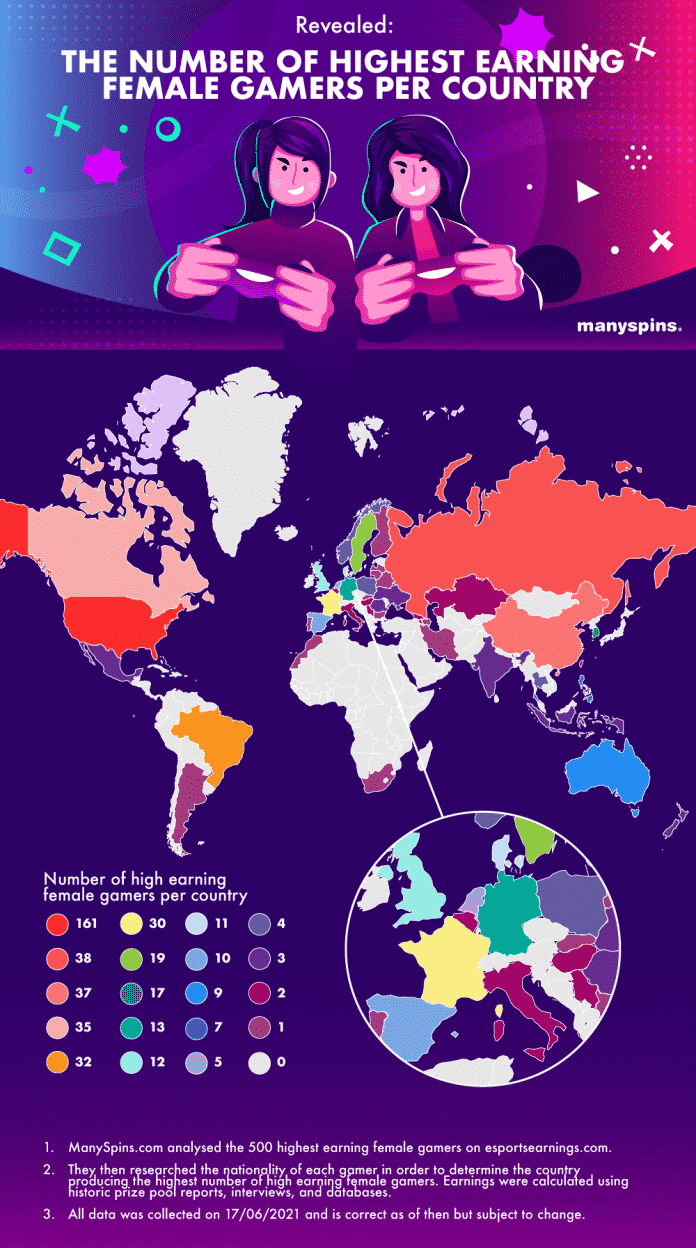 In the wake of E3, many gamers have been left clamouring for more updates regarding their favourite games. Not every game was given the spotlight, however, as many high profile fanbases (such as Animal Crossing) were left without mention.

One of the biggest turning points at this conference, however, was how diversity in gaming has been promoted to the main stage. Spurred on by talk of diversity in gaming, ManySpins.com decided to investigate the 500 highest earning female gamers in the world and determine which country has produced the highest number of top earning female players!

ManySpins.com can reveal that, in first place, is the United States. Almost two fifths of the highest earning female gamers originate from the US, at 161 gamers! Top earning players include Mystik, Emy, and Hafu, and all top U.S. players have earned a combined sum of over $1.8million.

In second place is Russia, with 38 top earning female gamers. Top gamers from Russia include CS:GO champs vilga and Ant1ka. Russian players have earned over a quarter million, with total earnings calculated at $333,495.30.

Ranking third is China, with 37 top earning female gamers. Top gamers from China include Liooon and Eloise, both Hearthstone players, and the combined wealth of all Chinese players is $485,505.39.

In fourth is Canada, home to 35 of the top earning players! The highest earning female player of all time, StarCraft II pioneer Scarlett, hails from Canada and has won more than $300,000 from the game alone! Despite ranking fourth, gamers from Canada have earned the second highest of all with a combined wealth of $847,702.60.

In ninth place is Germany, with 13 of the highest earning female gamers originating from the European country. Despite ranking above the UK, German female gamers have not earned as much with a combined sum of only $41,364.94.

Finally, ManySpins.com can reveal that in 10th place is the United Kingdom, with 12 of the 500 highest earning females living in the UK. Players from the UK have earned a combined sum of $102,592.73.

When conducting this study, Kevin Roos, spokesperson for ManySpins, had this to say;

It’s vital now that we’re in 2021 to breakdown the stereotype that gaming is a ‘boys club’; as Laila Shabir stated in the Take-Two panel at this years E3, ‘nine out of 10 kids play video games, not nine out of 10 boys, nine out of 10 kids’. This makes it incredibly important to highlight the power of female gamers and showcase that their skills and prowess is recognised around the globe.