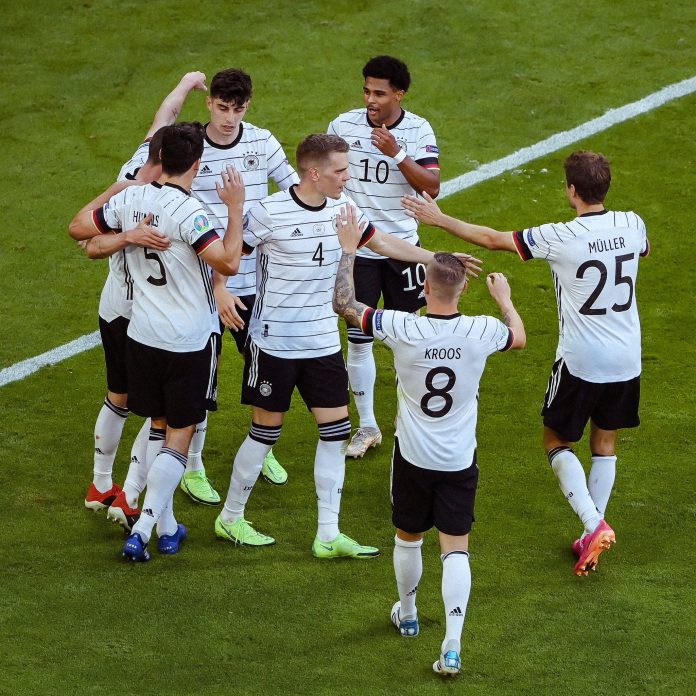 Germany defeated Portugal 4-2 at Munich in their second game of the group stage. The match was blazing fast from start to finish, and the sense of urgency was with Joachim Low’s men right from the get-go.

Robin Gosens acrobatically scored the first goal of the game, but it was ruled out for a slight offside. Shortly after, Portugal converted a corner situation in their box into a perfect counter-attacking goal scored by Cristiano Ronaldo. Bernardo Silva ran unmarked from his box, playing a long ball to Diogo Jota who set up his captain for a clean finish.

Kai Havertz and Serge Gnabry took turns making a horizontal run into the box and the Portuguese defense could not grasp the shape of the Germans throughout the game. Two own goals from Ruben Dias and Raphael Guerreiro in the first half saw Germany come from behind to take the lead at half-time. Both own goals were forced by the German attack.

The second half saw the Germans continue their offensive onslaught, with Kai Havertz scoring a well deserved goal for himself, converting a great cross from Robin Gosens. The Atalanta wingback finally got onto the scoresheet himself by heading home a cross from Joshua Kimmich.

Diogo Jota converted from close range for Portugal to make it 2 goals for the actual away team. However, it wasn’t enough to turn things around in their favour.

Germany now find themselves level on points with Portugal, and are in pole position to qualify for the knockout stages should they win against Hungary. France and Portugal will battle it out for the other spot, as they face each other on the final group matchday.