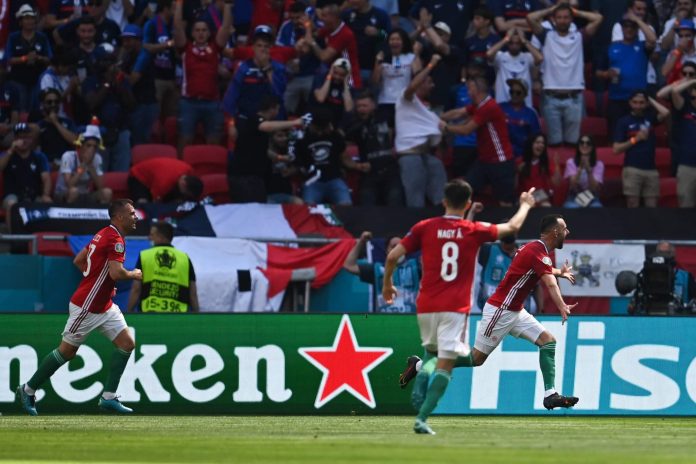 Hungary managed to draw with World champions France at the Puskas Arena in Budapest as 64,000 fans cheered both teams on. The match was a very entertaining 1-1 draw, with goals being scored on either side of half time for the hosts and the visitors respectively.

Attila Fiola surprisingly have the lead to Hungary, beating France captain Hugo Lloris on his near post in a very cool finish. The player went on to indulge in an extremely enthusiastic celebration near the fans, scaring a reporter on the side in the process.

The hosts went into the lead at half-time, and finished a very defensive first 45 minutes with a surprise goal. The second half saw yet another Willie Orban mistake punished by Antoine Griezmann, after the RB Leipzig defender made two errors in the match against Portugal.

Shortly after half-time, Ousmane Dembele came on for Adrien Rabiot and that opened up the game for France. Rabiot did not offer much, and Dembele’s pace really offered France an instant impact, with the player hitting the post with his first touches.

The fans roared on in the second half, as France continued to attack in the second half. But overall, Hungary put in a solid team effort that helped them secure a point in the end. Hungary still have a chance to qualify for the Round of 16, but they will have to do their best against Germany to try and win. France, on the other hand, face their biggest test yet in Portugal on the next matchday.

Previous articleIntel’s Tiger Lake refresh Core i7-11390H makes its way at Geekbench
Next article“Never Had I Ever (Season 2)”: All we Need to Know about Netflix’s Comedy Drama Series

OFFICIAL: UEFA have moved the 2021-22 Champions League final from Russia to France