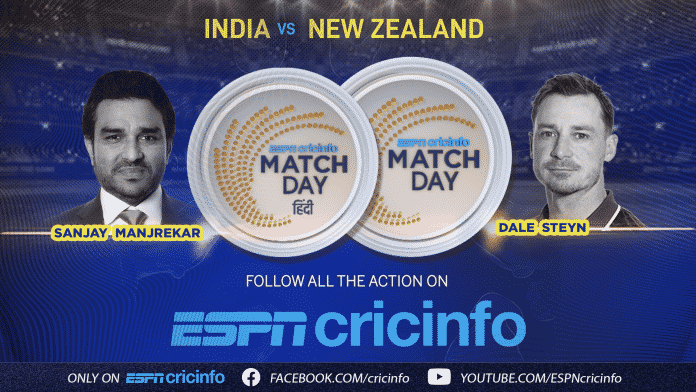 The entire ESPNcricinfo editorial desk from India, UK and Australia will be joined by cricket experts such as Dale Steyn and Sanjay Manjrekar, to present session-by-session analysis for the fans in an engaging, informing, and entertaining manner. There will be four live shows per day and the coverage will be led by ESPNcricinfo’s flagship show Match Day, where leading cricket experts dissect each session of the match with real-time insights, statistics and robust opinions.

Commenting on the association with ESPNcricinfo, Dale Steyn, the legendary South African fast-paced bowler said, “Test Matches have always had a very special place in my heart. It tests the team’s endurance and bond in a manner no other match does. I am happy to be a part of ESPNcricinfo where I get to observe the action once again and share the analysis with keen observers and fans of the sport. What better match to do this for than India vs New Zealand. I am beyond excited.”

To revel in the noise the match is set to make, ESPNcricinfo has also attracted a host of partners such as Intel, Accenture, Apple, Pernod Ricard, ICICI Prudential Mutual Fund, TVS Tyres and Fun88 among others. A clear indication then of ESPNcricinfo’s credibility in offering well-rounded programming & content with the positive sentiments from the advertisers.

Furthermore, ESPNcricinfo’s coverage would also attract the Hindi consumers through its Match Day Hindi program that offers ball-by-ball analysis of the match. An effort to include more enthusiasts of the game.

The heat is on already, as both teams have picked their squads and the ESPNcricinfo experts have announced their choices, leading to a heady fan banter on the social platforms.

The historic finale is all ready to start 18 June onwards. Tune in!