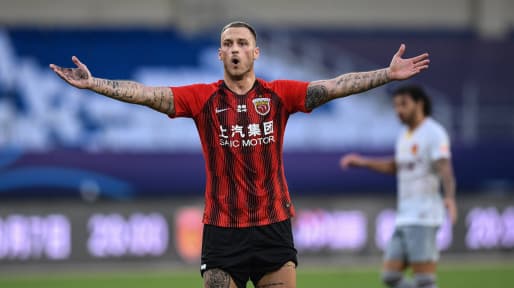 Reports have emerged that Marko Arnautovic has allegedly made racist comments about North Macedonian players.

This was first noticed when Austrian captain David Alaba put his hand over Arnautovic’s mouth in an angry manner. Later on, it was heard that the Austrian striker had made racist targets, specifically targeting two players of the opponent team, namely Egzon Bejtulai and Ezgjan Alioski.

UEFA has decided to investigate the matter, and an inspector has been appointed to make the necessary enquiries regarding the matter before coming to a decision.

If Marko Arnautovic is found guilty, he’ll be banned for the rest of the tournament. The Football Federation of Macedonia has made it clear that they want the harshest possible punishment if found guilty. There should be no excuse for racism.

However, Marko Arnautovic has denied the allegations and has apologised for any inconvenience caused due to him to the opposition players and fans.

He further went on to make a statement on Instagram “There were some heated words yesterday in the emotions of the game for which I would like to apologise – especially to my friends from North Macedonia and Albania.”

“I would like to say one thing very clearly: I am not a racist. I have friends in almost every country and I stand for diversity. Everyone who knows me is aware of that.”

The Football Federation of Macedonia also made a statement on Facebook

“The FFM strongly condemns the nationalistic outburst of Austrian player Marko Arnautovic, after a goal scored in yesterday’s match, addressed to Ezgjan Alioski,” a statement said. “At the same time, we inform you that we have submitted an official letter to Uefa demanding the harshest punishment for Arnautovic.”

“We are always against nationalism, discrimination and all other forms of insults and outbursts that are not in the spirit of football and values that we all stand together. We will always stand up and defend the interests and dignity of Macedonian national players wherever they perform.”

For the last 10 years, UEFA has been trying to fight racism; therefore, if found guilty, there may be severe consequences in the works given Marko Arnautovic is found guilty.

Previous article
OFFICIAL: Premier League announce the fixtures of the 2021-22 season
Next article
One-stop solution to all your printing needs at home

Unstoppable: David Alaba has won the league title every season for the last decade!

David Alaba is the perfect replacement for Ramos