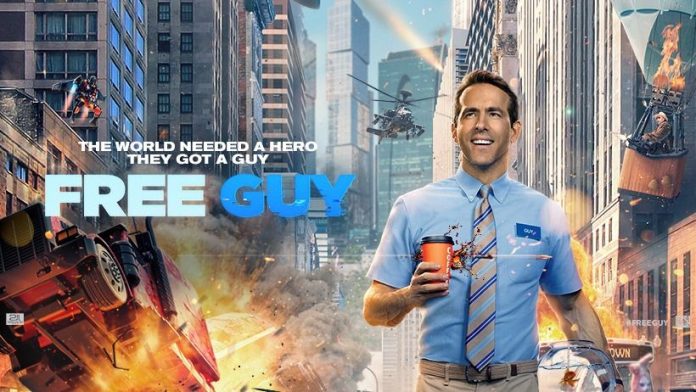 Netflix has dropped a new trailer again of Ryan Reynold’s one of the big-budget COVID-19 pandemic closures, “Free Guy”. However, this time it has launched the fixed release date and trailer for its approval.

It seems that the new three trailers have accompanied each film’s announced drop dates that are making an exciting peek at the evolution of a market campaign. It is an incredible action comedy directed by Shawn Levy. In this show, Reynolds will play a guy who is realizing as a character in a video game.

Jodie Corner is featuring the role of a Motokov Girl and Milly. This Motokov Girl is a renowned game character controlled by a real-world human who will inform a guy that the creator of the game Antoine, will shut the entire thing down.

The trailer of this latest film has shared multiple footages. It is beginning in the same way with Ryan Reynolds, who is a Guy leading his normal life in the game. Jodie Comer, who is the Molotov Girl reveals the reality to him that he does not belong from this world, and his world is fictional. She is also telling the Guy that the man who was built it is going to destroy it. Now two of them make the team and trying to save the place of the videogame with the help of everyone before the creator finishes the Guy or the game itself.

The 20th-century new trailer of the series has been released on 10th June Thursday.

The film’s first trailer was released on 7th December 2019 contained with the original release date of 3rd July 2020. So it is assuming that it is completely a different film in the new trailer. It has been seen that this latest version shows the action elements of the Guy and apparently his free will.

In this latest version, we will see Motokov Girl, who sparks for everything, which is included with Guy’s epiphany about the actual nature of his reality. The original ad shows a poking reference to his parent’s company as an artist, which is known mainly as 20th Century Fox: Disney.

After the pandemic scuttling of the original July 2020 release date plan, 20th Century Studios also set a new release date on 11th December 2020. This announcement was the campaign of the second trailer that is shifted to the emphasis on Molotov Girl’s chemistry.

This film definitely belongs to one of those blockbusters that are also affected by the pandemic situation.

Free Guy: How to Watch

At first, this film was scheduled for July 2020. But due to the pandemic one, it has been slated on 13th August in the US and also in the UK. It has informed that this film will get an exclusive 45 day run in cinemas before it is available on any digital streaming services. As Disney has owned the 20th Century Studios so it is assuming that Free Guy will be available on Disney-occupied Hulu or Disney+ platforms when it will be available for the streaming services.

It has been reported that Free Guy will arrive on theatres on 13th August 2021 and after 45 days it will come on Disney+.

Here is the trailer of Free Guy: