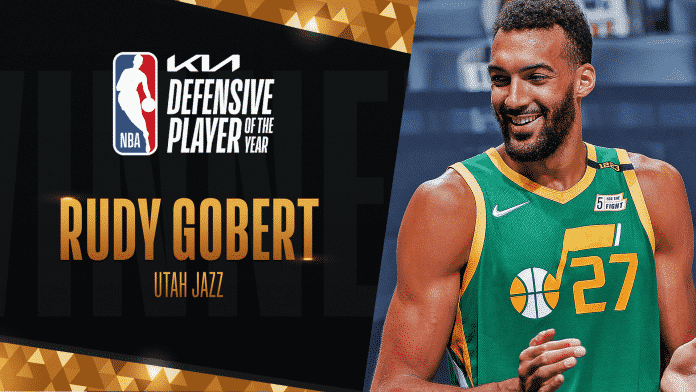 This isn’t the first time that Gobert has earned the honour. He also won in the 2017-18 and 2018-19 seasons making this year his third. The 7’1″ French player has also joined an elite list of players who have won the award at least 3 times, including Dikembe Mutombo (4), Ben Wallace (4), and Dwight Howard (3).

Here are the top three rankings for this season’s DPOY Award:

NBA Advanced Stats suggest Gobert ranks 2nd (in the NBA) in defensive win shares. This is a measure of a player’s defensive impact on the winning. He has defended the most field goal attempts in the NBA (549) that too at the rim. He also held his opponents to 50.1% shooting on those shots. This impact also earned him the third-lowest mark among the 27 players who have defended at least 300 shots at the rim in NBA this season.

Gobert has been selected as an NBA All-Star for the second time now and he averaged 14.3 points and 13.5 rebounds in 71 games this season. He also topped the charts in NBA in total rebounds (960) while ranking second in rebounds per game. He led the league shooting an NBA-high 67.5 percent from the field for the 2nd time in the last 3 seasons. A machine!

NBA: How to watch the NBA Playoffs 2021 matches live in India?