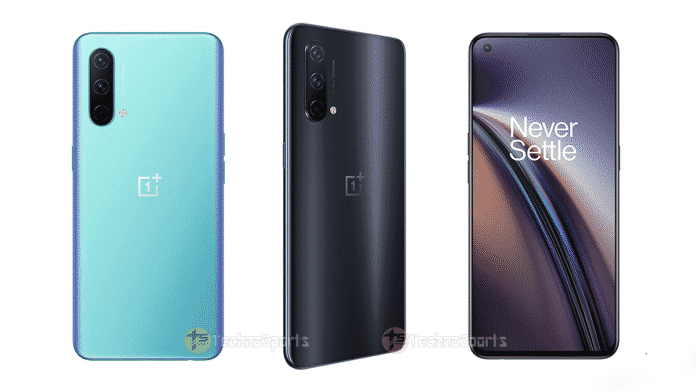 OnePlus Nord CE 5G is launching in India on 10th June and the company is teasing the smartphone now and then in their social media handles. Recently we have seen the first look of the smartphone from the back which also looks similar to the previous OnePlus Nord 5G model but with only three rear cameras.

Some recent official images reveal the front and backside of the smartphone more prominently. The official image shows a flat display with, slightly curved design at the back and this time the Nord CE will miss the alert slider like all the other OnePlus devices.

Apart from these, there are few other leaked specifications of the smartphone. Tipsters claim that the OnePlus Nord CE 5G will have a 6.43″ FHD+ AMOLED that will support a 90Hz refresh rate. The phone will have an in-display fingerprint scanner. Like the OnePlus Nord 5G, the upcoming CE will also feature the Snapdragon 750G chipset. At the back we can see 64MP(Omnivision)+ 8MP ultra-wide+ 2MP depth triple rear camera setups. At the front, we have a 16MP selfie camera. The will be a 4,500mAh battery that will support Warp Charge 30T Plus.

There is also another leak, suggesting that the phone will be priced at Rs.22,990 and it has been found listed in one of HDFC bank’s offer chart where the bank seems to have listed several other products from OnePlus brands along with their non-GST included prices along with their discount prices.