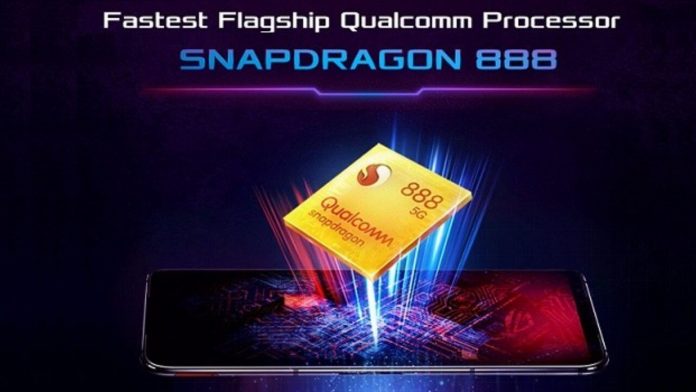 Qualcomm launched the most powerful Android mobile processor late in 2020. It was named Snapdragon 888 and it went on to power a number of new smartphones. Let’s see which are the smartphones launched with Qualcomm Snapdragon 888 SoC in India.

The special feature of their camera module is the presence of the Hasselblad brand. This is a Swedish camera manufacturer which is highly rated in the optics domain worldwide. It houses a 4500mAh battery which is paired with Warp Charge 65T fast charging. It is offered in two variants:

In terms of optics, it houses a triple rear camera setup that features a 64 MP Primary Lens, a 16MP Sony IMX766 secondary sensor and an 8MP sensor. It packs a 4500mAh battery which is paired with Warp Charge 65T fast charging. The two different models are priced at:

Xiaomi Mi 11X Pro flaunts a 6.67-inch E4 AMOLED type display and comes with a screen resolution of 1080 x 2400 pixels. It runs on the MIUI 12 based on Android 11 OS. It supports a triple rear camera setup. This has 108-megapixel Samsung HM2 primary sensor alongside 8 MP and 5 MP sensors.

For selfies and video chats, it sports a 20 MP snapper at the front. It draws energy from a 4,520 mAh battery cell and is paired with a 33W fast-charging support. It is available in two variants:

The iQOO 7 Legend sports a 6.6-inch FHD+ E3 Super AMOLED panel and has a refresh rate of 120Hz. It has a triple camera system at the back that features a 48 MP primary sensor (with OIS), a 13 MP ultra-wide macro sensor, and a 13 MP portrait sensor.

For selfies and video chats, it sports a 16 MP selfie snapper. It is fueled up by a 4,400mAH battery supported by 66W flash charging. The two variants of the device are:

ASUS ROG Phone 5 flaunts a 6.78-inch AMOLED type screen and has a stunning refresh rate of 144Hz. This gaming smartphone has a triple camera setup at the backside. This includes a 64 MP Primary Camera along with a 13 MP Ultra-wide Angle Camera and a 5 MP macro sensor. The selfie camera is boosted by the availability of a 24MP snapper. It packs a strong 6,000mAh battery cell and is paired with a 65W fast-charging support. The ROG Phone 5 is offered at:

The ASUS ROG Phone 5 Pro comes with a ROG Vision – Color PMOLED display. Another difference is that it offers 16 GB LPDDR5 RAM and 512 GB of internal storage. The price of this handset is Rs 69,999.

The ASUS ROG Phone 5 Ultimate version offers an even better 18 GB LPDDR5 RAM along with 512 GB of internal storage. The trigger buttons are located on the shoulders and on the back. Another interesting feature is the availability of the mini-monitor which will help in viewing their screen when playing a game. It is priced at Rs 79,999.

The optics are manufactured by Zeiss which is a German manufacturer of optical systems. It has gimbal stabilization 2.0 and a periscope lens which makes the camera module even better. It draws energy from a 4,200mAh battery cell and is paired with 55W fast-charging support. The price of the device is: