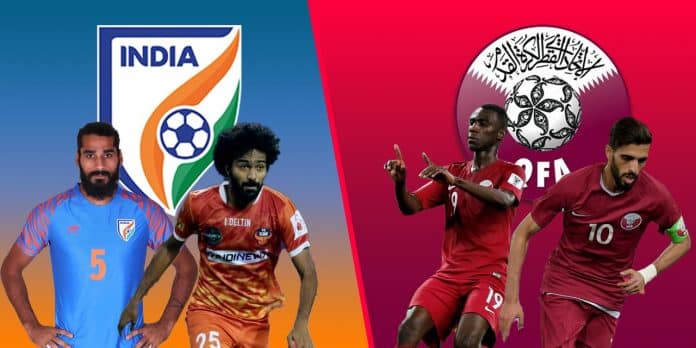 After securing a famous away draw at Qatar in 2019 with a defensive masterclass, India take on Qatar once again in the joint qualifier match (World Cup as well as Asia Cup). Qatar, who lead India by 47 places in the FIFA rankings, are predicted to be a huge test for Igor Stimac.

India currently sits 4th in group E consisting of Qatar, Oman, Afghanistan, and Bangladesh. With three games to go, India need maximum points in order to finish 3rd, which would grant them a spot in the 2023 Asia Cup group stages. India have 3 points from 5 games played, while Qatar have 16 from 6. Finishing 4th would have them compete in the play-off for the Asia Cup qualification. Although this match is India’s home fixture on paper, it will be played in the Jassim Bin Hamad Stadium in Doha.

Qatar’s form on the run has been nothing short of brilliant, with them defeating the likes of Azerbaijan and Luxembourg, and drawing level with Ireland. In the meantime, India have found it extremely difficult to get out their pit of bad form. They are win-less in the previous 10 matches, which includes their 6-0 hammering at the hands of UAE. However, Stimac fielded several debutants in that fixture, which were much more than naturally expected.

In the fixture against Qatar, India are expected to start all their first-team players, with an exception in case of injuries. Mumbai City’s Rowlin Borges is set to miss the clash due to an injury. The defensive midfielder suffered a hamstring injury and is thus in doubt for the two upcoming games after this as well. FC Goa’s Glan Martins is expected fill in for him in the starting XI. The potential debutant showcased his prowess in the AFC Champions League.

Chinglensana Singh will also be missed by Stimac. The in-form Hyderabad Centre Back was set to partner Sandesh Jhingan in defence, but he is said to have reported soreness.

With Sunil Chhetri returning as skipper, the players in the squad would be highly motivated with the positive mentality the India all-time top scorer brings. India’s head-to-head record with Qatar reflects no wins, but a draw out of two matches. A win in Qatar’s favour is representative of their scintillating form across all competitions. Igor Stimac’s side enters the contest as underdogs but have the potential to cause an upset.

Share
Facebook
Twitter
Pinterest
WhatsApp
Linkedin
Previous articleNew Mi 11 Ultra’s sales get delayed in India, Xiaomi apologizes to fans
Next articlePokerBaazi.com raises the bar for an online poker gaming experience with the launch of its new app; Introduces an array of new and advanced features

India vs Qatar: takeaways from the clash