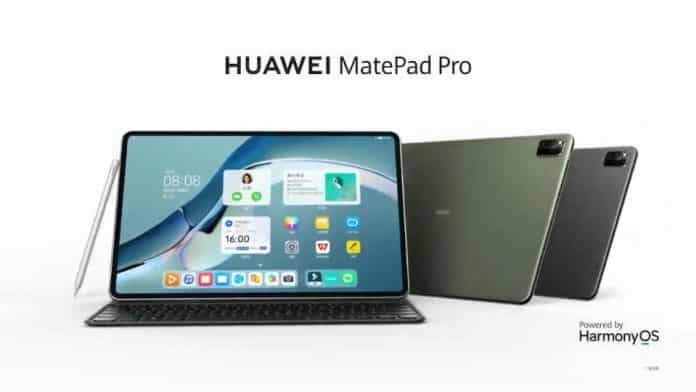 Qualcomm Snapdragon chipsets will power the smaller variants of the MatePad Pro over the Huawei Kirin chipset, which has been their go-to chipset for the prior tablets.

Huawei’s switch to HarmonyOS does not give it the rights to access Google apps and services, which has impacted the brand’s sales outside of China. Huawei’s app gallery has been constantly updated to make it as good as the Google Play Store but it still comes nowhere near it.

Huawei has had several allegations thrown at it regarding how the HarmonyOS is just a glorified open-source Android-Fork. The Verge’s Jon Porty successfully attempted to install Whatsapp’s official Android APK on the new MatePad Pro which gives those allegations a level of credibility.

This year’s MatePad Pro features some updates that resemble Apple’s tablets. The new FreeNote feature lets you use the M-Pencil to write into dialogue boxes and it turns your handwriting into typed text format. The MatePad’s home screen now includes a dock with your most frequently used apps.

The 12.6″ variant of the MatePad features a webcam that is built into the bezel on the long edge of the screen which makes it more convenient for attending conference calls in landscape mode. It comes with a 1600 x 2560 OLED screen.

Huawei’s screen-mirroring technology makes a comeback in the MatePad Pro; previously, one could mirror their phone screen onto the screen of their tablet. Now, you can do the same with Huawei laptops or use them as an external display.

The 12.6″ MatePad Pro comes with a 10,050mAh battery which can run playback video for 14 hours simultaneously on a single charge. It will feature a 40W fast charger and with a 27W wireless charging capacity. It also offers reverse wireless charging at 10W.

The MatePad Pro features a triple-camera setup on the rear, four mics, eight speakers and support for 5G. A new generation of Huawei M-Pencil stylus will be introduced along with the MatePad Pro as well. The new stylus will be more accurate with a 9ms latency with a platinum-coated transparent nib.