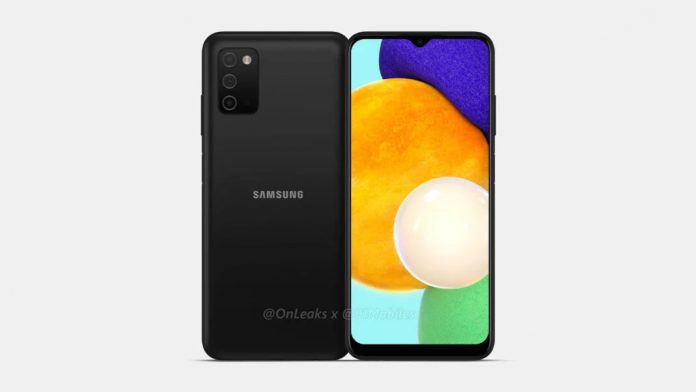 Samsung has introduced a fingerprint scanner in the Galaxy A03s, unlike the Galaxy A02 which did not have the provision for it. It will most likely be placed on the side.

The device will feature the standard 3.5mm headphone jack, a mic at the bottom, a USB type C port along with a speaker.

The Galaxy A03s will feature a 6.5″ screen. The screen that Samsung has gone with is not clear but it could possibly be the same one as its predecessor, the PLS IPS HD+.

The Samsung Galaxy A03s will likely feature a 5MP front selfie camera and a 13MP rear camera exactly like its predecessor.

We have no information regarding the processor of the Galaxy A03s, but if Samsung decides to go with the same processor as the Galaxy A02, it will feature a Snapdragon 450 SoC.

The Galaxy A02 had released in November 2020 with a 6.5″ screen with the PLS IPS HD+ display with the V shaped notch. It was powered by the Snapdragon 450 Soc, with a 5000mAh battery and a 15W charger. It featured a triple camera setup with a 13MP main sensor along with two, 2MP sensors. It ran on Android 10, and came with upto 64GB of space along with a provision for an SD card.

The Samsung Galaxy A03s may be released in the upcoming months, the price of the device may be similar to the Galaxy A02 since it is an entry-level device.