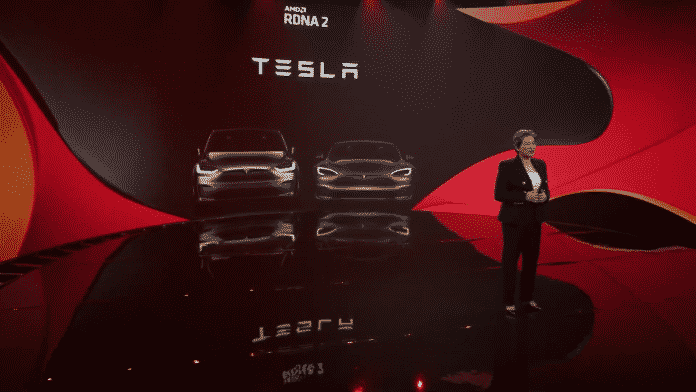 In today’s COMPUTEX 2021 AMD officially announces the presence of its RDNA 2 GPU architecture in the Tesla Model S and Model X automated cars. It will deliver graphical power to Tesla’s infotainment system with the same strength AMD is known for.

Tesla claims that the infotainment system is based on the Tesla Gaming Arcade platform. It houses a 2200 x 1300 pixels resolution 17″ Cinematic Display. There is also a secondary display for the passengers sit in the second row.

Based on the latest consoles available in the market, like PS5, the infotainment system can deliver up to 10 TFLOPs of processing power. Passengers can enjoy their games from any seat as it allows wireless console connectivity. Tesla doesn’t reveal any of its specs yet, but we can understand what hardware could be inside from other resources.

Patrick Schur is one of those insiders who revealed the existence of AMD RDNA 2 inside the Tesla Model S. As per him, the Tesla Model S will use the Navi 23 GPU. Though it focuses on the entry-level segment, still good for the existing consoles.

A block diagram from Tesla (given below) shows that the Navi 23 GPU is powering the infotainment system of the Tesla Model S 2021. There is a 128-bit bus interface having four 2GB DRAM modules. The total bandwidth will be 224GB/s. The AMD Navi 23 GPU will be connected to the main B2B connector via a PCIe Gen 3 x8 link and have HDMI 1.4.

Again, no information about the GPU configuration, however, the Navi 23 could have a max of 32 compute units or 2048 cores. To reach the 10 TFLOPs of computing capacity, the clock speed needs to be up to 2.44 GHz.

Elon Musk himself tweeted earlier that the Tesla infotainment system will be able to host Cyberpunk 2077, which is one of the top power-hungry games to date. That clearly means the passengers can enjoy almost every game currently available in the market.