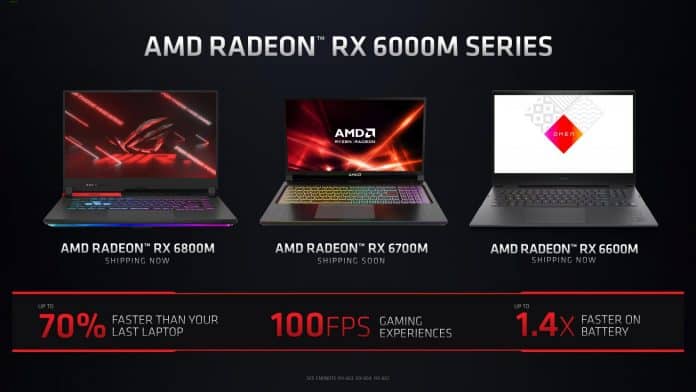 Finally, today marked the launch of new Radeon RX 6000M series mobile graphics, bringing RDNA 2 architecture to gaming laptops for the first time, starting with the Navi 22 GPU. Much like NVIDIA, who did not bring the power-hungry Ampere GA102 GPU to mobile, AMD is also reluctant to bring the flagship Navi 21 GPU to mobile.

“There have been incredible advances in gaming over the last several years, with powerful technologies allowing desktop PCs to deliver high-octane, beautifully complex and immersive worlds like never before,” said Scott Herkelman, corporate vice president and general manager, Graphics Business Unit at AMD.

“Today we’re excited to bring the high-performance, energy-efficient AMD RDNA™ 2 architecture to next-generation laptops to unlock the same level of high-performance experiences and true-to-life visuals for mobile gamers. With AMD Advantage, gamers can be sure these next-gen laptops are designed, optimized and purpose-built for the best possible gaming experiences.”

The new flagship mobile GPU with a TGP starting at 145W and its performance is targeted at 1440p across several gaming titles. Much like the RTX 3080 mobile GPU, which is more of a desktop RTX 3070, the new RX 6800M is similar to the desktop RX 6700 XT.

The Radeon RX 6800M is promised to deliver 120+FPS in a wide range of modern triple-A games at 1440p. Also, you have features like AMD Smart Access Memory or Smart Shift and the new FidelityFX Super Resolution to increase performance for free.

Coming to the middle of the stack, the Radeon RX 6700M sports the same Navi 22 GPU but with 2304 stream processors and the same 2.3 GHz clock speeds. However, it sports a 10 GB GDDR6 VRAM capacity, a 160-bit bus interface, and 80 MB of Infinity Cache.

So, this mobile GPU comes with a TGP starting at 135W, and its performance is targeted at both 1440p and 1080p across several gaming titles.

This is an interesting mobile graphics solution as it’s the first AMD Navi 23 RDNA 2 GPU, featuring 28 CUs or 1792 stream processors. It is great to see AMD using more memory to keep these GPUs future-proof, sporting 8 GB GDDR6 memory running across a 128-bit bus interface whereas the TGPs ranging up to 100 Watts.

The Navi 23 GPU will feature only 32 MB of Infinity Cache and will be the smallest Navi chip to house the brand new cache technology. It is said to first sport on an HP Omen 16, which has already been announced, and the AMD Radeon RX 6600M is expected to outperform the NVIDIA RTX 3060 6 GB mobile GPU in several games.

These new mobile GPUs will soon be available from the latest OEMs like MSI, Asus, Lenovo and HP as of now, but more gaming laptops will soon be announced in the coming days. The two gaming laptops introduced as of now are the ASUS ROG STRIX G15 and the HP Omen 16, paired with Ryzen 9 5900HX CPUs to give the best AMD Advantage.