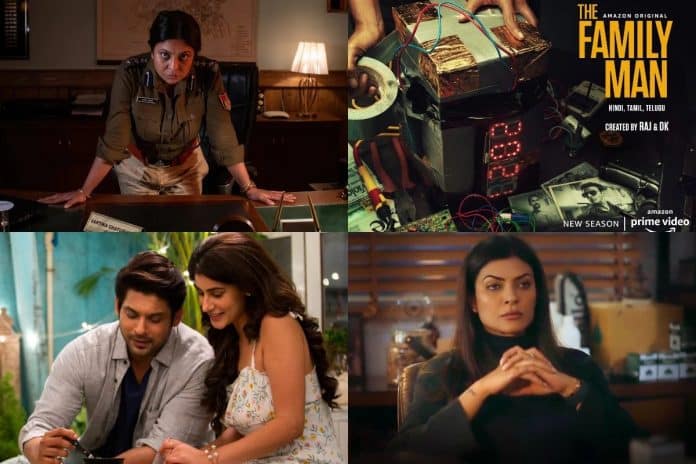 All the OTT Platforms are ready to gear up to launch some summer-filled blockbuster Indian web series; it will provide a kick-off with their fantastic Indian series lineup of June. In the coming days, all the OTT platforms will be filled with many original release shows.

This June, all the OTT platforms are going to release all categories of the Indian web series. This month, the streaming services have come with many incredible Indian series with some original releases like ’Sunflower’ and ‘The Family Man(Season2)’.

Here is a list of the top Indian web series which will release in June 2021:

It is a Hindi language crime drama series on Disney + Hotstar. It explores the story of a woman named Aarya. A brave join who joined a mafia gang just to take revenge on the murder of her husband.

It is mainly a quirky murder mystery series that revolves around the housing society Sunflower. The resident of this society Sonu has dived into the murder mystery and become the suspected chief.

14.Rudra: The Edge of Darkness

Ajay Devgn’s upcoming show in which we will see him in an intense and new gritty cop version. It will be his first digital entry with crime drama series. Incredible storytelling format and powerful character will make this film most desirable to the audiences.

This also an incredible crime thriller series coming on Netflix. The story of this series is based on a teenage tourist who disappears in the misty town of Himalayan. A local cop named Kasturi join hands and discovered a skeleton and recover a Himalayan forgotten myth of bloodthirsty. Ravina tendon is featuring in the lead role in this series.

It is a short film. The story of this film is based on some young adults as they have navigated the gamut of emotions that return with the romantic connection in an unexpected way.

It is an upcoming Indian web series on Amazon Prime Video. This series explores not only some strong female protagonists but also introduces some finest female talent on camera.

The story of this series is based on the Nirbhaya case. It follows the Delhi police investigation into the finding of the men who are the main culprit of this case.

This is one of the top-rated web series coming out from India. The story of the second season will start with Vaibhav who took admission to the renowned coaching center Maheshwari Classes and had left his friends to begin a new journey. In his new journey, he meets Sushrut, another student, and becomes his best friend.

It is also an Indian crime drama series. In this season we are going to know how we are just a con call away to lose all our earnings and wealth. It also depicts the terrible site of the internet, the power of money over relations, and also some political propaganda.

The story of this series is based on a real-life mother-daughter duo named Neena and Masaba Gupta. They are playing the versions of themselves in this playful, imaginary peek into their lives in movies and fashion.

From the first season of this series, we have got some mixed reviews. The story of this series is based on the novel When Dimple Met Rishi by Sandhya Menon. The story revolves around two people who are a very lovely mismatch for each other.

It is an upcoming Indian crime drama series. The story revolves around a female constable who visited undercover to bust an underworld gang.

It is a story of a woman who is finding a man whom she has to catch otherwise she would not find redemption. The plot of this series is set in Kashmir.

The story of this romantic series is based on Dhruv and Kavya who are in a live-in relationship. All the episodes will revolve around many problems and also solutions of the regular day-to-day. There are eight episodes in this new season.

This story of this series is based on the life of a global superstar, wife, and also mom who has suddenly vanished without any trace. The police and her loved ones started to search for him and find some strange facts. Madhuri Dixit is playing the lead role in this series.

After waiting for a long time, the second season has yet to release. The story of The Family Man is based on the protagonist Srikant Tiwary, appointed as an intelligence officer. He is straddling in the two worlds of his family and spying.

This series will depict how Srikant Tiwary, an ordinary man, comes to an extraordinary situation. Season 2 also features the digital debut of the popular Telugu actress Samantha Akkineni who will play an important role in this season. The trailer is also consuming with some funny moments and dialogue of Srikant Tiwari with his wife.