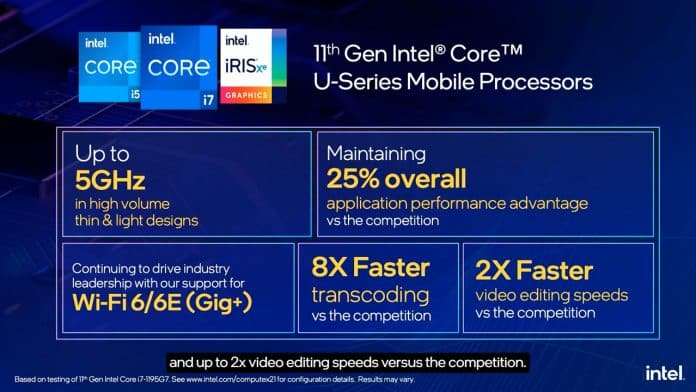 Today, at Computex 2021, Intel made a big announcement by launching two new Tiger Lake refresh CPUs, which we have already seen before with laptops from MSI and Lenovo. These two new additions to the 11th Gen Intel® Core™ processors lineup are combined with Intel’s co-engineering work with independent software vendors (ISVs) and original equipment manufacturers (OEMs).

“We’ve taken the world’s best processor for thin-and-light Windows laptops and made the experience even better with the addition of our two new 11th Gen Intel Core processors with Intel® Iris® Xe graphics. In addition, we know real-world performance and connectivity are vital to our partners and the people who rely on PCs every day, so we’re continuing that momentum with more platform capabilities and choice in the market with the launch of our first 5G product for PCs: the Intel 5G Solution 5000.”

Intel again stressed delivering real-world productivity, collaboration, creation, gaming and entertainment in a thin & light form factor. These two U-series processors, though they come with the same low TDP but bring up to a 5.0GHz boost for the first time; also, the Intel Xe graphics has been improved.

Intel was also bold enough to compare its new Core i7-1195G7 against AMD’s Ryzen 7 5800U made some bold claims in terms of productivity and gaming. If you take into account Intel’s strong graphical performance and Neural accelerators, it is not surprising as Intel is revolutionizing its CPUs with Intel Xe graphics.