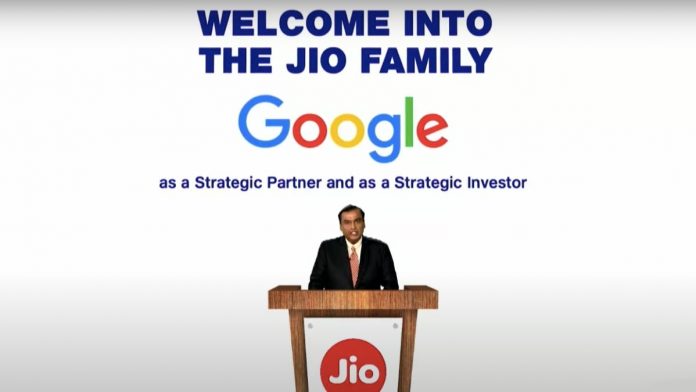 It is being reported that the US giants, Google and one of the biggest companies in India, Reliance are working closely to build 5G smartphones for the Indian audience. Reliance chairman Mukesh Ambani announced in 2020 that they are working on this project with Google and now this has been reiterated.

This time, it is Google’s CEO Sundar Pichai himself who has come forward and gave affirmation of this project. The digital arm of Reliance; Jio is the leading telecom company in India which is the biggest smartphone market in the world.

Jio sold a significant portion of its stake last year to multiple companies which helped the share price of Reliance skyrocket. One of the companies which bought a part of Jio was Google. The US-based company acquired a 7.7% in Reliance Jio by investing Rs 33,700 crore. Google’s investment in the company last year was a part of “Google for India Digitization Fund.”

The 5G technology is yet to be floored in the Indian market but companies are already launching 5G devices to get the first-mover advantage. Sundar Pichai said, “We are focused on building an affordable phone… we are committed to making progress on the project and we are working with them (Jio).”

Reliance has released ultra-affordable 4G phones and amazingly cheap data plans in the country in 2016 which disrupted the whole Indian telecom market. It is touted that they have the strongest base to bring the 5G revolution in India. Also, Mukesh Ambani himself has stated that he wants Reliance to drive this massive change in the country.

This partnership might present Google-Jio-branded 5G smartphones in front of us very soon. With 5G technology coming soon in India, this will help Reliance to grab an even higher market share in the country.