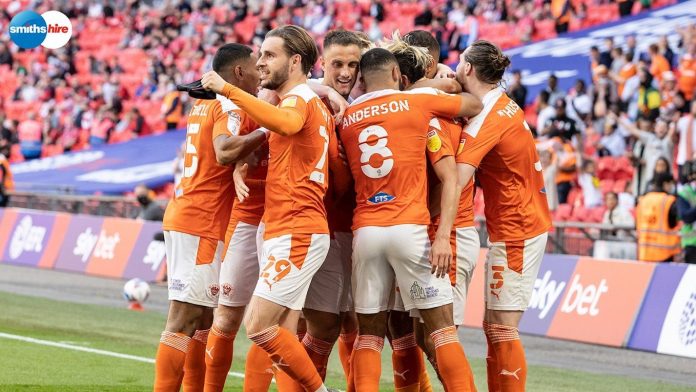 In 2017, thousands of disenchanted Blackpool supporters stayed away in protest at the toxic regime running the club in their last visit to Wembley. But they have flourished under fresh ownership and made their way through to the Championship. Kenny Dougall’s double against Lincoln City sealed the promotion for Blackpool.

Neil Critchley, who left Liverpool for Blackpool last year, stressed only something special could lure him from developing the next generation of Trent Alexander-Arnolds at Anfield, where he was under-23s coach, and the scene as the players gallivanted across the pitch with their medals to a backdrop of Status Quo, knee-sliding in unison before their supporters were just that.

After the victory against Lincoln City he said, “Never in my wildest dreams did I think it would end at Wembley with an occasion like that but that was a reason I left Liverpool because I wanted to taste senior football, the highs, and the lows, a journey.”

“When the final whistle went, I’ve never felt emotion like it. It was an incredible feeling.”

“Through adversity you see strength and through that you see passion.”

“To give them a night like this – may be a few days for some of them – is brilliant. It’s been a great season and I couldn’t be prouder. A special mention for Simon, this is for him.”- he added.

It will be interesting to see how Blackpool performs in the Championship next season.