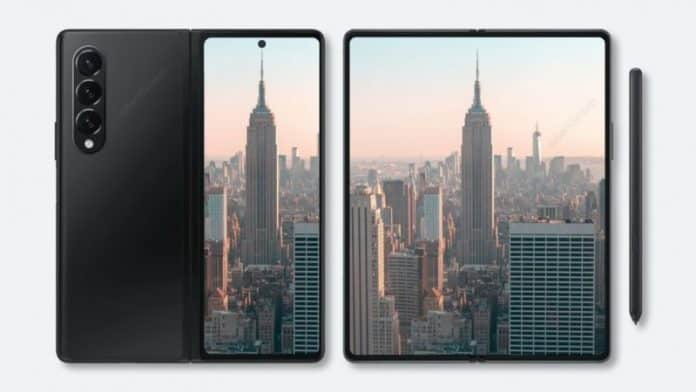 Samsung had revealed the Galaxy Z Fold 2 alongside the Galaxy Note 20 series during the Galaxy event in August 2020, followed by full details at the beginning of September 2020. But recently there have been plenty of rumors surrounding the upcoming Galaxy Z Fold 3. The above alleged leak-based render of the Samsung Galaxy Z Fold 3 image is owned by Ben Geskin and will give a proper view of how the smartphone is going to be.

This feature rounds up everything we have heard so far about the Galaxy Z Fold 3, including what features we might see, when it is expected to be released, and what it might look like.

This might interest you to know that as per certain leaks, the Z Fold3 will supposedly feature an under-display front-facing camera that is housed towards the interior of the device.

As per leaks by renowned leakster @FrontTron, the upcoming Samsung Galaxy Z Fold3 is supposedly going to feature an under-display camera to the front of the device with the leakster revealing the details of the five cameras that will be featured on the Samsung Z Fold3.

The first of these five cameras will be a 16MP module that will be of the under-display variety instead of featuring a notch or a punch-hole to the top. This could be related to a tech that was showcased by Samsung at the SID 2021 exhibition with the trademark name Under Panel Camera or UPC. Interestingly, there will be a second selfie camera on the device, towards the outer side of the device which can be used when the device is closed shut. This camera will feature a 10MP sensor of the punch-hole variety. It is still unknown why Samsung is opting for a single in-display cam.

Towards the rear of the device is where the tech advancements start fading away, as the leakster mentions that the device will come with a triple camera stack to the back consisting of a couple of 12MP sensors and a 2X telephoto lens.

Certain other rumors have stated that the device might feature a 6.2-inch external display whilst the inner display might be 7.5-inches in size, both of which are rumored to offer 120Hz refresh rates. The inner display might also feature support for the S-Pen, but it will not replace the Note, since the device will lack a capsule or housing area for the pen.