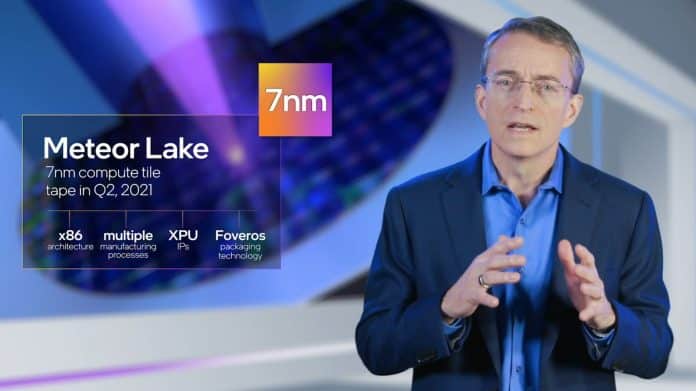 Well, it seems the new CEO Pat Gelsinger has made his claim of delivering its much anticipated Meteor Lake 7nm computer tile tape in Q2 2021 true. Intel’s Gregory M Bryant has confirmed that they have started the week by taping in their 7nm Meteor Lake computer tile.

Intel’s 2023 Meteor Lake processors will use a non-monolithic design as it features different manufacturing processes and will be packed using Intel Foveros technology. So, Intel has confirmed that Meteor Lake’s compute tile has taped signifies that their hybrid approach is ready, and it can now be completed to tape out the whole chip.

The announcement is significant as Intel was criticized a lot, even by their investors, for not delivering its 7nm based CPUs while AMD and others using the fabless method did so much earlier. This is the first time we have seen such positivity from the world’s biggest silicon manufacturer, and there’s a lot of thing happening at Intel.

The Meteor Lake is now rumoured to power the 14th Gen Core series based on a 7nm Enhanced SuperFin node. It is expected to launch after Raptor Lake, a successor to upcoming Alder Lake CPUs that will bring hybrid big.LITTLE architecture.

Meteor Lake will feature a hybrid of Redwood Cove core and ‘Next Mont’ architectures and will become Intel’s fourth product series to feature a hybrid of high-performance and high-efficiency cores. Intel finally is being as supportive as AMD by extending support for the upcoming LGA1700 socket, which will debut later this year with 600 series motherboards for Alder Lake CPUs.

“Love, Death, and Robots(Season 3)”: All the Latest Updates and Expectations