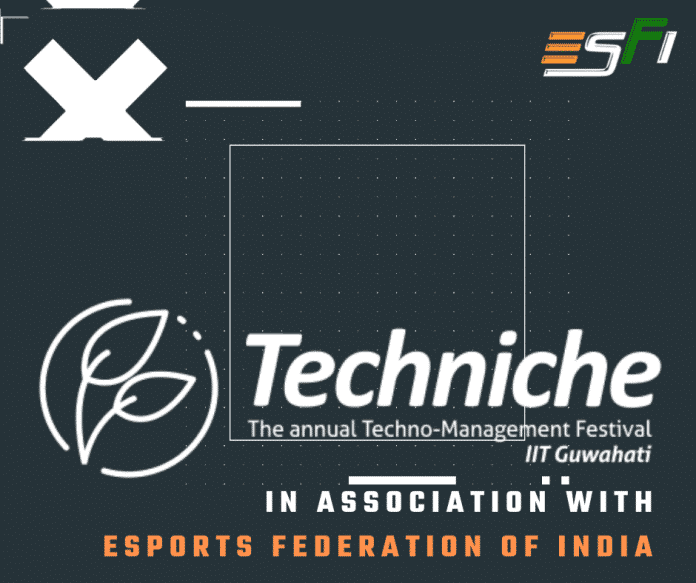 Valorant, Rocket League and Chess will headline as lead games at the esports festival “Funniche”

New Delhi, May 24, 2021: The Indian Institute of Technology, Guwahati (IITG) is all set to host the 24th edition of their annual techno-management festival – “Techniche” and the rise in esports popularity has prompted the organizers to initiate a special esports festival, titled as “Funniche” as part of the main festival in collaboration with the Esports Federation of India (ESFI). While the event will be IITG’s maiden experience to engage with esports, the event is scheduled from June 1-14, 2021.

The event will see popular esports games like Valorant, Rocket League being played by the participants and Online Chess has also been included keeping the rise in popularity for the chequered game in India. Valorant, which is fast catching up with the fancy of the esports players in India, will see four rounds followed by the knockouts. Alongside the esports titles, fun trivia based on web series, TV shows and movies will also be included to keep the audience and participants engaged.

Commenting on the partnership, Prof. Chivukula V. Sastri, Chairman of Technical Board, IIT Guwahati said, “Techniche IIT Guwahati is pleased to partner with ESFI to launch their first-ever Esports festival in India. This festival aims to foster and motivate young Indian minds and ignite competitive spirits despite being at home. The main motive of including esports was to boost the morale of the bright young brains and to develop the culture of Esports among our students.”

IITG were the first ones to conduct India’s first virtual techno-management festival last year during the lockdown and it was a big success and with the rise in popularity of esports, it is expected that the first edition of “Funniche” will redefine the whole concept of the virtual annual festival and also raise the bar of excitement around the festival.

“We aim to boost the Indian Esports ecosystem by promoting, encouraging and educating the younger generation and I am confident this partnership is a concrete step towards that direction. We aim to initiate an ecosystem where esports thrives without any limitations. I personally believe, our recent association with IITG, which hosts one of the most inspiring fests, will support us to fuel interest and awareness among the participants about the world of esports and who knows we have to get one of our future Champions amongst these IIT students,” Lokesh Suji, Director, Esports Federation of India & Vice President of the Asian Esports Federation (AESF) said while commenting on the expectations around the first edition of the “Funniche”.

The Convenor of Techniche IIT Guwahati, Shubham Singh, further added, “Team Techniche is very excited to host an esports event for the first time. We have put a lot of thought into this and feel that it would be a great way for people to connect and get a competitive feel while being at home despite the pandemic.”

Techniche has always been a favourite in the festival circuit and the upcoming edition will surely be of no exception and the esports festival “Funniche” promises to be the showstopper for this edition.