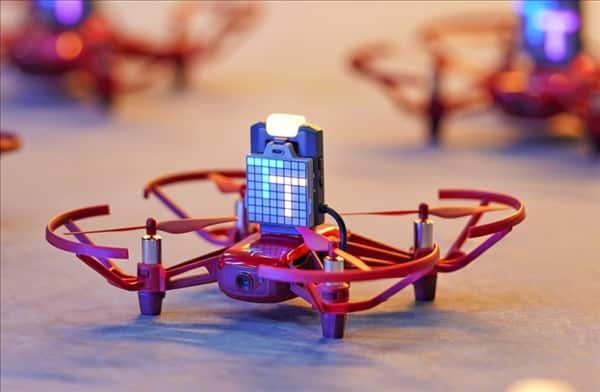 Over the past few years, we’ve seen the rise of new, interactive methods of teaching kids of all ages the basics of coding. Whether it be Apple‘s Swift Playgrounds, Kano’s interactive toys or Sphero’s programmable robots, there’s a whole host of educational gadgets out there. DJI – the company that’s made its name in consumer drones – has also dabbled in educational devices, and the latest to enter the market is the RoboMaster Tello Talent drone.

The RoboMaster Tello Talent (TT) offers more powerful features than its predecessor, the RoboMaster Tello EDU, and also features an additional functionality, which is absent in the Tello EDU. A new extension board and greater Artificial Intelligence (AI) applications make the device a very powerful education resource, GizmoChina reported.

The innovation from the previous model is a mix of hardware and software improvements including graphics, stability, a more user-centric interface, and an exclusive curriculum focused on student development at all levels. There is an open-source computing chip and new swarming software, the report said.

It builds on its predecessor – the Tello EDU – by adding a new extension board that enables more AI applications. The new hardware also includes an open-source ESP32 processor, programmable 256 colors LED light, dot matrix screen, and a ToF (time of flight) sensor. There’s also a new swarming feature for when you have multiple Tello Talent drones. The new ESP32 board offers support for Arduino and MicroPython coding platforms, and also supports Scratch offline coding.

Students will be able to write custom code to change the colour and flash frequency of the LED light or create shapes and animations (like scrolling letters) on the two-tone dot matrix screen. Its infrared ToF sensor is there to offer distance detection up to 1.2 metres, enabling environment detection and basic obstacle avoidance.

For more advanced students – with multiple drones – there’s the ability to program a swarm of drones to fly in custom formations and maneuvers using Scratch, Swift, or Python using dedicated swarm software. It has a range of up to 100m and a max altitude of 30m, perfect for indoor use in large open rooms like school halls.