Mi TV 4A 40 Horizon Edition to launch on June 1 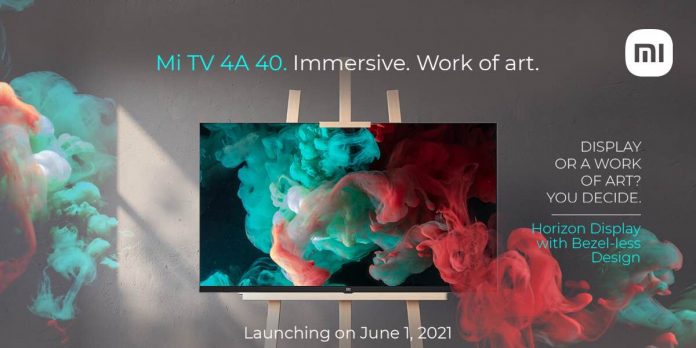 Xiaomi is releasing yet another Smart TV, the Mi TV 4A 40 Horizon Edition on the 1st of June. With this release, Xiaomi intends to pit this TV against the OnePlus 40″ TV.

Through a virtual release event due to the prevailing situations, Xiaomi will release the Mi TV 4A 40 Horizon Edition as the successor to the current generation Mi TV 4A 40 priced at Rs.22,999.

Xiaomi in the release poster showed off the display design which they like to call a ‘Horizon Display’ which essentially is a bezel-less design. Xiaomi in a tweet displayed the TV on a canvas stand and claims it will offer an immersive experience with beautiful visuals and is truly a work of art.

Both those variants had a 178-degree viewing angle and were powered by the Amlogic Cortex A53 quad-core processor with a Mali-450 MP3 GPU paired with 1GB RAM and 8GB internal storage. They run Android TV pie and shipped with Xiaomi’s PatchWall.