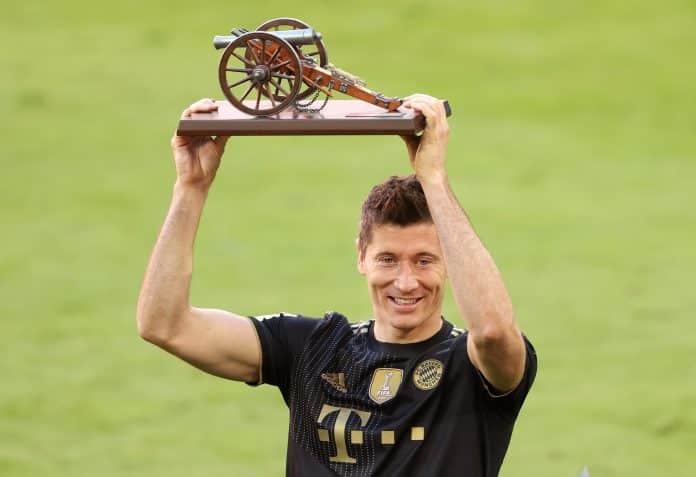 Robert Lewandowski has been in fine form this season in Bundesliga despite Bayern crashing out against PSG in the Champions League. The Polish striker equalled Gerd Muller’s record for the highest number of goals in a single Bundesliga season, and everybody expected him to break the record.

But it seemed he was destined to share the record with Gerd Muller as he was unable to find the net till the 90th minute of the game. Lewandowski had 10 shots in total in the Augsburg game and it almost looked like the goal wasn’t going to come until he finally finished after a rebound off the goalkeeper, scoring his 41st Bundesliga goal setting a record.

Read: Twitter erupts in appreciation as Robert Lewandowski scored his 41st Bundesliga goal in the 90th minute of the final game of the season to create a new record

Lewandowski told Sky Germany: “I have no words. I tried to score for 90 minutes, I tried everything – and it fell in the 90th minute. I am very, very happy,”

“I saw that Leroy had shot, then I just speculated. I wanted to score earlier, of course, but I knew that the situation would come at some point. I also thank my team-mates for trying everything.”

“It was a special moment, it was historic. But I can’t even classify it so soon after the game.”

“I wasn’t angry, but I was disappointed. I asked myself why the goal didn’t work out today,” he added.

“Thanks again to my team, they are also on my record.”

After missing out on the Ballon d’Or last season as it was cancelled due to the COVID-19 pandemic, Lewandowski is one of the main contenders for this year’s winner. He truly has been the best striker for the last few years.