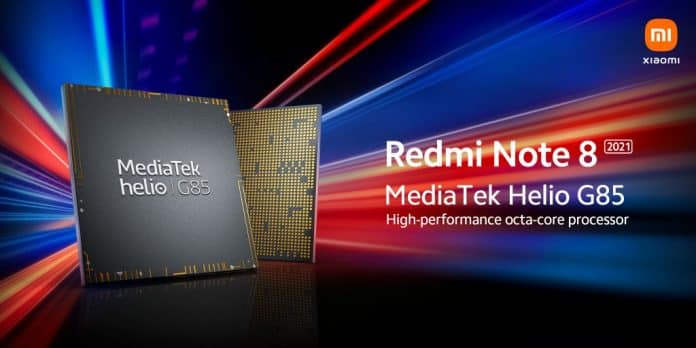 Redmi Note 8 2021 is now the latest point of attraction as the company is now reviving a two-generation smartphone and is planning to launch the renewed version in the global market with some new specifications. Among all, we have already shared some important information about the device.

Now the company has taken to Twitter to announce officially that the Redmi Note 8 2021 will feature MediaTek Helio G85. When the whole world is busy creating new technology and moving forward with new smartphones and more modified smartphones, where Xiaomi is surprisingly making something new with an old smartphone. This is a pure marketing strategy of the company.

The company has not disclosed the official launch date of this smartphone but it is assumed that by the first week of June we can see the global launch of the smartphone.

Previously, the device was spotted in a certification that had a model number M1908C3JGG and is codenamed “biloba”. The Redmi Note 8 2021 is expected to be powered with the eight-core Helio G85 chip that comes with an ARM Mali-G52 MP2 GPU and will be coupled with 4 GB + 64 GB and 4 GB + 128 GB storage variants.

According to several reports, it will run MIUI 12.5 out of the box. The device could draw the energy from a modest 4,000 mAh battery cell and will be paired with a 22.5 W fast-charging support.