Some changes in the design of Google Pixel 6 Pro 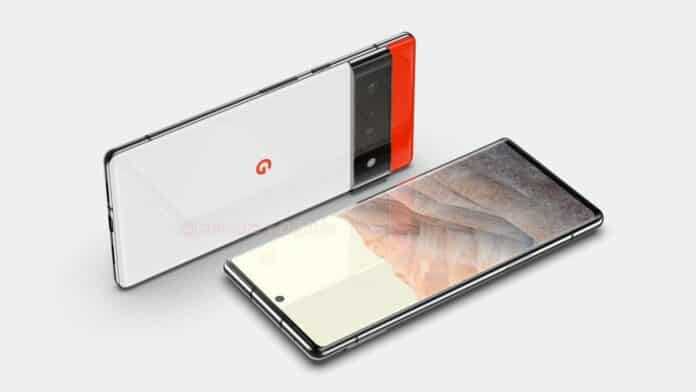 After an off-year in 2020, it sure seems like Google is coming back to truly flagship smartphones this year with a bang. Today, some of the first credible renders of the alleged “Google Pixel 6 Pro” have emerged from a trusted source and reveal a much larger size too. Google Pixel 6 Pro alleged renders have appeared on the internet again. The renders leaked by the popular tipster OnLeaks reveal ‘comprehensive’ details about the upcoming Pixel smartphone.

Digit has partnered with Steve H. McFly (OnLeaks) to leak CAD-based renders of the Google Pixel 6 Pro. The phone has the same unique camera island at the back as seen in the FPT leak with a redesigned dual-tone landscape that has orange colour on top and in the Google logo. The camera island hosts three sensors, a first for the Pixel range, and includes a periscope lens as well. There’s a hole-punch display seen upfront, with the camera cutout now at the top center. The volume rockers and power buttons are on the right edge.

As per the leaked renders, the Google Pixel 6 Pro will come with a much tall form factor as compared to the previous iteration. The phone as shown on the renders could offer a 6.67-inch curved display. Moreover, the phone could be seen featuring a triple rear camera setup, a first on a Pixel phone.

Coming to the specifications, the Pixel 6 Pro is reported to feature a 6.67-inch curved AMOLED display with a fingerprint sensor embedded underneath. On the rear side, a trio camera setup could be seen stacked horizontally with a bright orange accent above it, and the Google logo placed at the centre. The back camera setup includes a primary wide-angle camera and a periscope telephoto camera, along with an unidentified sensor situated next to the LED flash. It is tipped to have dual stereo speakers at the top and bottom.

SIM card slot may be situated on the left edge. Pixel 6 Pro is reported to be powered by Google’s home-grown processor and measure 163.9×75.8×8.9mm. It also supports wireless charging.

If we are to believe these renders, then the upcoming Google Pixel 6 series will receive a massive upgrade on the design and camera front. In addition, the rumour mill has suggested the phones to equip Google’s very own silicon chip, allegedly named Whitechapel system-on-chip. While Google is tight-lipped about its upcoming flagship, reports predict that the Mountain View tech giant could likely ditch the ‘XL’ moniker due to the shift to higher-end hardware. Leaks in the past have suggested the Google Pixel 6 Pro to feature a 50MP Sony sensor and an 8MP periscope camera with 5x optical zoom. There’s no definite word as to when the Pixel 6 lineup will debut, but we expect Google to follow a similar launch timeline for the upcoming flagships this year.

Previous articleEuropa Conference League: Everything you need to know from the format to the purpose of the league
Next articleWhat will the Apple Watch Series 7 look like?