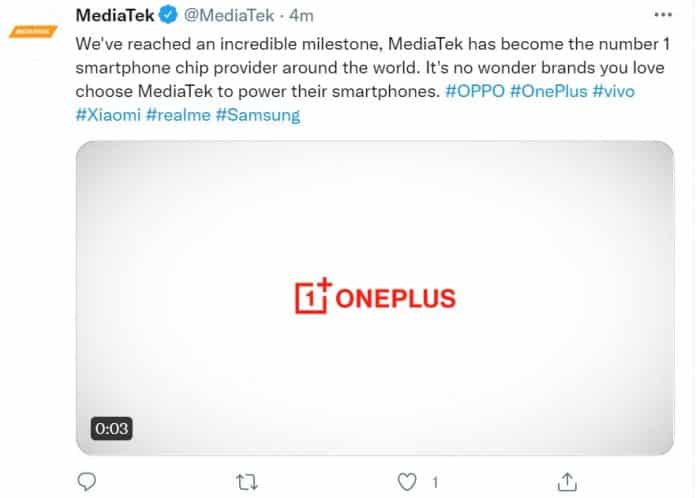 There seems to be a possibility that OnePlus will launch a new MediaTek Dimensity 1200 powered smartphone. This might be their upcoming flagship that is going to be powered by the company’s first MediaTek chipset. Until now OnePlus has been relying on Qualcomm Snapdragon chipsets for powering all of its smartphones, but now we can hope for the change.

The rumored smartphone that is speculated to have the Dimensity 1200 might be the recently rumored OnePlus Nord CE. A few days back this name had been leaked by a tipster and quite recently MediaTek had also officially revealed a partnership with the company in a tweet along with several other smartphone brands like OPPO, Realme, Vivo, Xiaomi, and Samsung.

In the meanwhile noted tipster of China, Digital Chat Station has mentioned this partnership of OnePlus and MediaTek in his Weibo post. Apart from this Mukul Sharma, who is also known as @stufflistings in Twitter has also claimed that this MediaTek Dimensity 1200 powered smartphone will release in the month of June.

The company is yet to provide details of its rollout plans for the year. Certainly, we’ll see some of these leaked models make their way into the market as the year progresses.

Surprisingly MediaTek has deleted the official tweet that reveals the partnership of the smartphone brands with the company. This might also indicate that some of the companies have backed out, which in this case can be OnePlus, or else it might also happen that MediaTek might have mistakenly posted that tweet along with the video and has later taken that down. Now you can not find that tweet in MediaTek’s official Twitter account.

NZXT H510 series gets discounted on Amazon even before Prime Day