Top 10 outfield players who has played as goalkeepers 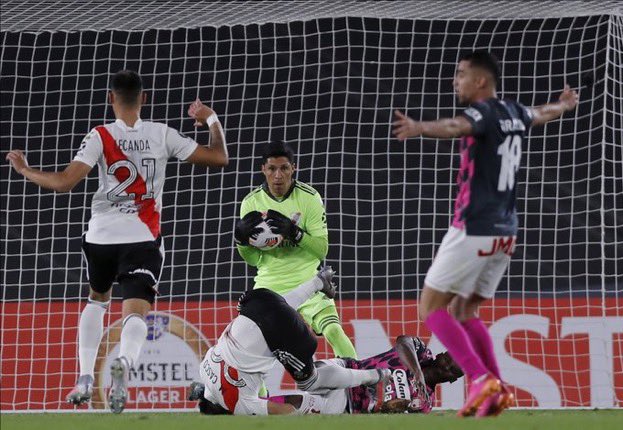 River Plate recently played midfielder Enzo Perez in goal in the Copa Libertadores, with all four keepers out due to COVID. His recent heroics for River Plate encouraged us to talk about the other instances where outfield players have stepped in goal.

After Ederson was injured, and Claudio Bravo was sent off in City’s clash against Atalanta last season, Walker stepped in goal and managed to keep a clean sheet.

Alves’ stint in goal only lasted a few seconds, with PSG keeper at the time, Kevin Trapp was sent off in the final seconds which prompted the defender to step in.

Almeida played in goal for AEK Athens in 2017, against Olympiacos, in a match which ended 2-2. The match was a semifinal and they advanced on aggregate.

Kane did not fare as well as the others on this list, conceding a hilarious goal during his time between the sticks in the Europa League.

The World Cup finalist went in goal with a quarter of an hour to play of Inter’s 2-0 Coppa Italia win over Hellas Verona in 2012, keeping a clean sheet.

Tomasz Kuszczak had been sent off, having previously replaced Edwin van der Sar. He conceded a penalty, which was the game’s only goal.

Edwin Van Der Saar had to be replaced due to a broken nose, and the ever versatile player stepped in. United managed a 4-0 victory with O’Shea keeping a clean sheet.

The day Petr Cech sustained the injury that made him wear a helmet, Cudicini also had to be replaced on the pitch after he was knocked unconscious. Terry stepped in goal and Chelsea won the match 1-0.

In 1991, the Irish forward stepped in after he had scored in the game as Tony Coton was dismissed. With experience in Gaelic football – a sport many claim was his real strength – Quinn stopped a penalty.

The legendary forward appeared in goal for Santos as they defeated Gremio 4-3, and he also scored a hat-trick in that very match.

Previous articleRuben Dias awarded the FWA Player of the Year award for 20/21
Next articleHas Leo Messi played his last game for Barcelona?