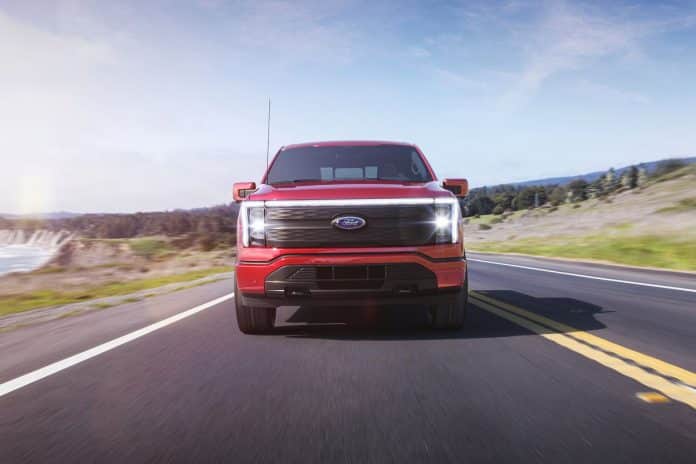 The company has unveiled the next generation of the Ford F-150 Lightning. One of the most popular products in the Ford catalogue continues in a new avatar. This time, the pick-up adopts an electrical motor in replacement of the internal combustion engine it usually shipped with.

“F-Series is America’s best-selling truck for 44 years, the backbone of work across the country, and a trusted icon for generations of customers,” said Bill Ford, executive chair, Ford Motor Company, according to Times of India. “Now we are revolutionizing it for a new generation”, he added.

The F-150 Lightning sports a similar look to its siblings that carry the F-150 moniker on the outside. Across the front and rear, a host of signature LED lightbars are present. What gives the F-150 a bold new look is the three new grille designs. A sculpted hood and air intakes that feature a smooth texture add to the looks of the vehicle.

On stepping inside the cabin, you are greeted by a wide variety of features and innovations, including a digital screen that the American automaker claims are larger than any currently offered on a full-size truck. Ford Co-Pilot 360 is also here, and it features BlueCruise that allows you hands-free driving on 100,000 miles of open roads.

You can use the Phone-a-key application that allows you to access your truck without the need for a key fob. Ford Power-Up is the company’s system updater that ensures the latest software updates are always delivered and installed to the truck.

“The F-150 is quicker than a Raptor, with standard 4×4 and independent rear suspension; a power trunk, enough juice to run your house for three days or power an awesome tailgate; and it will forever improve with over-the-air updates,” said Ford President and CEO Jim Farley.

The new silent pickup truck churns out 563hp and 775 lb-ft of torque. When put together with an extended range battery, this electric vehicle can hit 100 kmph in less than 5 seconds. It features a 4×4 system as standard along with the independent rear suspension. And when you have some hauling to do, the F-150 (XLT and Lariat variants) can carry a maximum of 2,000 pounds and tow up to 10,000 pounds. However, they need to be equipped with an extended-range battery and Max Trailer Tow Package.

The extended range of batteries can go 300 miles while the batteries on board can take you 230 miles as standard. It can be charged up with a 150 kW fast charger. You can get 54 miles in 10 minutes and a 15-80% charge in 41 minutes. The truck ensures you don’t run out of battery by the combined features of FordPass Power My Trip and Intelligent Range.

The battery can also be used to power up a home as it can deliver 9.6 kW of power and keep a house lit up for days depending on usage.

The Lightning will start at $39,974 and it will be manufactured at Ford’s storied Rouge complex in Dearborn just outside Detroit. The F-150 Lightning arrives in spring 2022 and the E-Transit – an all-EV of America’s best-selling van – will debut starting in late 2021. Ford is investing $22 billion in electrification through 2025 as part of its plan to lead electrification in areas of strength.